The beginning of my casein paintings 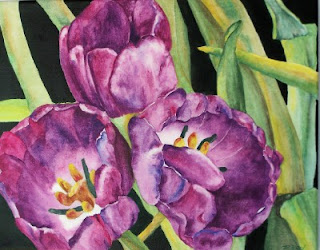 I decided to put up some of my older works, since I still have not resolved my Kodak problem (thanks, Rhonda, for your suggestions!).

So, the image here is of one of my earlier casein pictures. When I first tried it I had just bought the small set and immediately found that it handles like watercolor – except when it doesn’t! After playing with it a while I became hooked on it.

I had already done a picture of tulips in watercolor and decided to try them in casein. This picture is on an 11x14 canvas and not a lot of change in colors, since I didn’t have that many and, as mentioned, had some problems mixing colors in my new medium. Overall, I am still happy with it.

I also work in fluid acrylics – just can’t do well with regular acrylics, don’t know why.

It’s fun now to pick and choose which medium to work in - casein, fluid acrylic or watercolor - for each piece.
Posted by debwardart at 9:08 PM No comments: 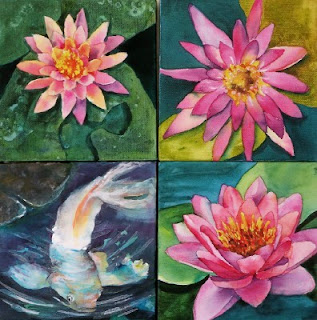 You just never know when, or if, you have touched a life.

I spoke to my friend, Mary, the other day. She had visited our home about two years ago with her daughter and her daughter’s boyfriend, Spencer. Spencer was very interested in art and was highly complimentary while viewing mine. Of course, I thought he was just being polite.

Turns out that, since that visit, he went into industrial design, then got an internship in fashion design, and the company that he works for is paying for him to attend RISD (Rhode Island School of Design). Wow!

He told Mary that when he met me I became an inspiration for him, since until then he had never been exposed to a “working artist” (a term my husband, who pays the bills, might dispute!).

Anyway, her story touched me, and I got to thinking that every day we have the opportunity to touch someone emotionally, whether we realize it or not.

Well, it appears that somewhere, deep in the depths of my computer, there are at least 9 pictures that never made it to the Kodak Easyshare program also lurking in my computer. Never mind the fact that 16 pictures should have been transferred, not 9.

After attempting to upload those images 4 times yesterday evening, and after spending some time this morning on the internet trying to locate answers to my questions about what the heck is going on, I am upset (and that's putting it VERY mildly).

Last week, against my better judgment (my motto has always been "if it ain't broke, don't fix it") I "updated" my Easyshare, at the behest of the Kodak folks lurking even farther (and safely) away in cyberspace - if I could get my hands on them right now . . . .

As far as I can tell I'm going to have to try to either re-upload the program or upload something else - and pray that all of my images are not lost. This will not be easy for me since I'm not a computer geek. I don't really trust computers, and therefore get very nervous any time anyone wants to get into my computer, so you can only imagine how nervous I am when I'm the one getting into my computer. G U L P!

So, wish me luck. If it works there will be more blogs and photos, and if not - well, just hope that it does, or those folks at Kodak are going to be very sorry.

If any of you out there in "Blog Land" know anything you think might help me - give me a holler.
Posted by debwardart at 2:45 PM 1 comment:

Since I told you about the bad shows I’ve done, feel I must say a word or two about the latest indoor show which occurred over the weekend. But, numbskull that I am, took no pictures – so no attached picture here. (For an artist, I’m not very visual recently).

The show was at the same church as last year (see my previous blog “Outdoor Shows . . .) but my location inside was so much better – first floor (only one step up/down to carry things); I was able to park my car just outside which made carrying out so much nicer at the end of the show; and I took less to begin with. Additionally, there really were more true artists/artisans this year, not crafts. And the weather was better.

My booth was just inside the door of a large room with 13 vendors and the “snack bar”. I angled my table so as not to impede traffic flow and did a demo all day long, which engaged some people in conversation. There was an almost constant stream of people, many of whom stopped to watch me paint or browsed through my sales items.

By the end of the day I had spoken to quite a few people, both other artists I knew as well as potential customers. The fact that a well known artist was doing demos in the main area of the show, but people were still coming to me asking about classes and picking up information gave me a good feeling, too.

Quite a few business cards and brochures were taken or handed out and I sold a whopping $37.50 in note cards (500% increase over last year’s sales!). At least this year I paid for my fuel and taking my husband out to dinner the night before for helping me to set up!

Of course, I won’t really know how successful the show was for a while – if people come to classes or call for commissions, that’s when I’ll find out how I really did.

All in all, not a bad day.
Posted by debwardart at 9:47 AM No comments: 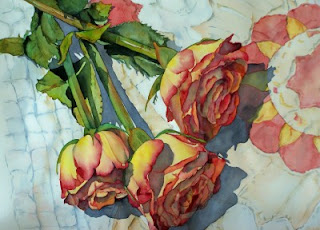 Her quilts are old and frayed, but I display my grandmother's quilts in my bedroom. I bought some roses to photograph with them and began a series utilizing the roses, quilts and other objects she left to me. By the time I did several, I decided "yes, I can paint roses" and it may be time to move on to something else! But I have more pictures planned utilizing my "treasures" - which have no monetary value but they mean something to me.
This painting (watercolor on Arches 140CP paper) won 3rd place in watermedia in a regional show.
Posted by debwardart at 10:59 AM 1 comment:

Outdoor shows – none for me, thanks! 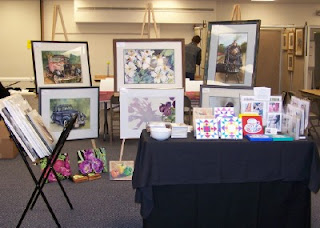 I’ve done a few outdoor shows through a gallery I used to be in. The only one that didn’t totally suck was the one in September in the parking lot of the gallery, and then only because there was a bathroom close by (ladies, can you hear me!) and they served food right there. Sold nothing, but at least it wasn’t terribly hot.

Not like the one in August – did I mention it was AUGUST(!) and not a glimpse of shade anywhere. Never been so hot in all my life. And, oh yes, sold nothing. Was lucky enough to have someone ask me to share their booth both times if I helped to put it up and take it down. Thank goodness I never decided to buy my own tent, etc., unlike another artist I know. (She bought the tent and metal racks, did a total of one show which she paid $$$$ to enter, and sold less than $50 in merchandise; she sold the tent and racks immediately!)

Then there was the indoor show at the church, supposed to be “well attended” and they supplied table and chair. Well, they did not lie - they did have quite a lot of people through. However, all that they were buying were crafty items, especially those geared toward children. I did get some “lookers” and actually sold something! 3 note cards, total sales $7.50. (We were supposed to give 10% to the church, but after putting in all that effort, I kept the $0.75 for myself!).

Then there was another indoor show sponsored by our local arts council, for which I do 2-3 classes a year, so thought I’d see what it was all about. This time I had to lug my own table and chair. They supposedly had teens helping out, but, typical teenagers, they were nowhere to be found while I was setting up or tearing down. The bright spot was that I knew several people there and we chatted, plus they had delicious food on premises and again the requisite bathroom close by. And, yes, I sold something again! This time I improved my profits by about 50% - sold a $10.00 box of note cards – to a woman who looked like she was making a drug deal! She looked around to make sure no one saw her, snatched the box of cards and practically threw the $10 at me!!!

After that I vowed never to do another show. Until, of course, I received the notice in the mail for the church event again this year. (I know what you are thinking! But hear me out).

My rationale this year will be that, since all I have to do is show up with my stuff, I will bring 2 easels (instead of 3) and 4 pictures (instead of 6) and my note cards – lighter load, you see – and use part of the booth to set up a table and chair for demos and hopefully get some students for my classes, not really caring if I sell anything or not.

This reasoning may be why we have earned the title “crazy artists”.
(Image - my set up last year for the show - it will be similar this year, only with less "stuff").
Posted by debwardart at 12:04 PM No comments: