This little painting (6x6) was inspired by a small group of darling chairs. They certainly looked hand made and again looked inviting, except for the city grime on them (and me with a new pair of khaki paints on!). If I go up there again with friends, I think it will be fun to sit there in the shade and chat. 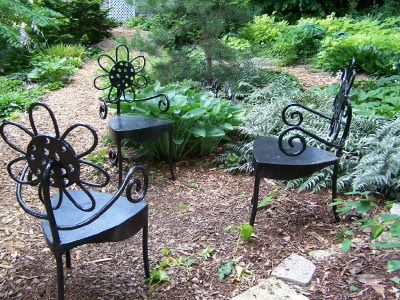 Since these are intended to be little quick paintings, I did a quick transfer of the image onto my canvas and began filling in the background, painting around the bench. 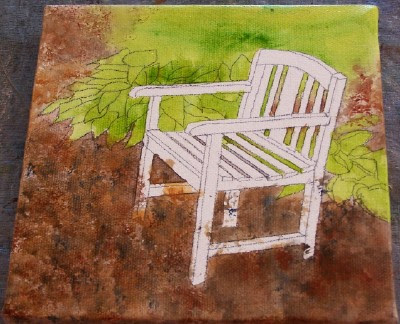 I added some texture for the mulch and greenery, then worked on the shadows and highlights in the hostas. I then added a few “rocks” and large gravel. 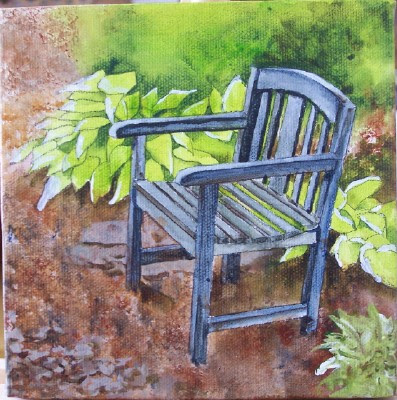 After a review, I decided it needed some light blue in the highlights on the chair so I added those, then some highlights and shadows to the larger rocks. 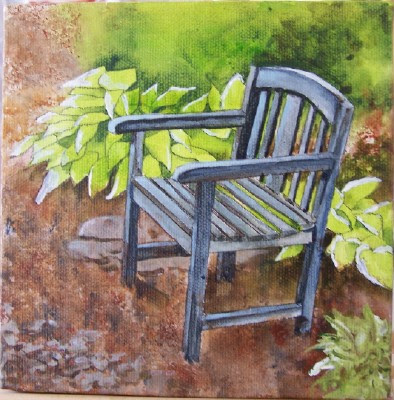 
I plan on painting these 4 small paintings for the show. 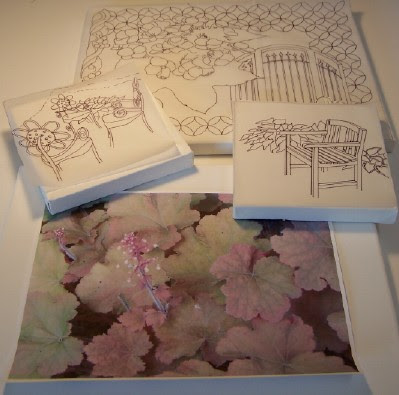 This first little painting (6x6) was inspired by one of the benches which are scattered along the paths. Had it not been a bit dirty I would have sat down there a few minutes while I sorted through my photos. Seems I’ve got an old SD card in my camera right now so had to delete quite a few old photos before any new ones would fit. 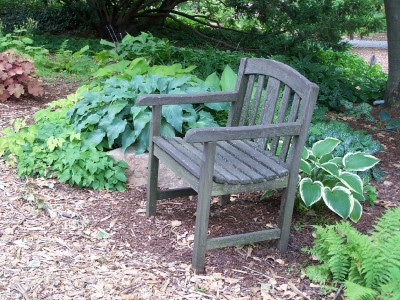 The coral bells were blooming but their leaves were in rather muted tones, duller in color that some that I used to have in the garden; guess it’s just a different type of plant. However, I immediately thought of a poured painting when I saw them, so snagged a photo of them. 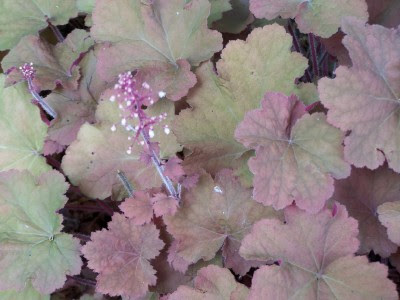 Something called Mountain Hydrangea was blooming and I thought it was pretty – as you can see the flowerets are much larger and the shape of the bloom is more oval than what we think of for a hydrangea. There were several bushes, all white blooms, so I don’t know if they bloom in any other colors. They had a slightly sweet scent which I leaned in to smell and it wasn’t until a couple minutes later as I zoomed my camera in on a bloom that I realized this bush was covered in bees. I absolutely HATE insects of any kind, but I kept my cool and just stepped back and walked away, no worse for wear. Guess these bees were just too busy to bother with stinging me! 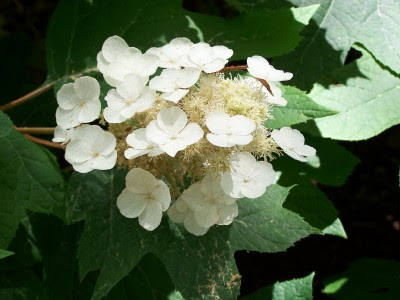 
Along one of the paths is this sculpture which I’m calling a pagoda for want of a better word. It intrigued me so I took several photos which I later incorporated into one of my paintings. 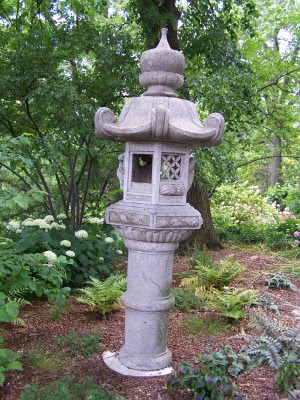 An old stone building greets you just past the visitor center as you pull in. This facility sits on the grounds of what was once an estate and I’m assuming this building was where the gardener worked – or perhaps it was where a gatekeeper lived. 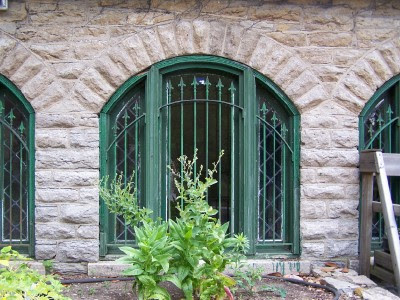 Once dubbed “Hospital Hill”, the Clifton area is on high ground, and is home to several hospitals as well as the University of Cincinnati and Hebrew Union College. In its heyday the area was home to some of the areas wealthy and elite, and there are numerous huge old buildings.

As I drove home I passed some of the hospitals and UC campus – and was amazed to see how many new buildings (dorms, I’m assuming) and hotels have sprung up. This has always been a busy area, due to the University and hospitals, but I can see that the surrounding area is in the midst of a resurgence of building. I guess that’s great for the local economy, but I can already see how the tone of the area is changing and how many of the beautiful old buildings have been torn down for new construction. Guess that’s the price of “progress”.
Posted by debwardart at 9:00 AM 1 comment:

A group to which I belong, the Queen City Art Club, has several shows a year in the Greater Cincinnati area. The next one will be at the Civic Garden Center in the Clifton area. Instructions said that the Garden Center wanted paintings featuring their plants and landscape, so a plein air paint out or photography session was organized. The first was rained out and I could not attend the second, so I stopped by after our last GCWS meeting to take some photos. It was a beautiful day, but not that much was blooming – so my choices were pretty much plants that were green, green or green! And green is NOT my favorite color.

When I walked through the garden, the benches and chairs caught my eye, as well as the design elements from the pagoda and old stone building – which has a roof garden (that was not quite ready for the summer).

There is also an old house on the property, but, try as I might, I couldn’t figure out where the path or drive was to get to that. When I went into the facility there was no one around to ask, and I could not find an information sheet with any directions. By that time it was getting to be late mid-afternoon and I was tired, hungry and thirsty so I headed home.

But I took some photos that are inspiration for my paintings. I’ll be doing paintings in acrylic on canvas – they will be small, quick to complete and won’t need to be framed, since the area in which to hang is small and price will also be a consideration.

This facility, while in the heart of the city, is surrounded by wooden fences and plantings and is remarkably quiet.

As I walked around the paths I discovered a little fish pond which is close to the main building, very close to the street. This was the only place that was noisy – due to road repair going on across the street. Even with the noise, it was a tranquil spot. I took some photos and discovered two fish just at the base of the waterfall and decided to take their photos up close and personal.

They apparently (1) are shy or (2) thought I looked like a great blue heron because as soon as I climbed up on the rocks above them they darted to the cover of floating plant leaves that covered almost half of the pond and refused to come back out. This was the best photo of them I was able to get.

But – on the gravel path to the pond are these delightful rocks in the shape of fish – and I was so impressed with the cleverness and workmanship of the little (I guess you would call them) rock sculptures.

For more information:   Civic Garden Center
Posted by debwardart at 9:00 AM 2 comments: