In addition to our train ride, we toured the Strasbourg Railroad Museum and this locomotive caught my eye.
Posted by debwardart at 9:06 AM 11 comments:

Here is Baldwin Engine 90 as it came into the station.
Posted by debwardart at 9:02 AM 5 comments:

ALL THE LIVELONG DAY - TRAINS 3

Baldwin Engine 90 again - this time featuring the conductor.  The photo is distorted since I took it with a plastic sleeve on the painting.
Posted by debwardart at 9:00 AM 5 comments:

I'VE BEEN WORKIN' ON THE RAILROAD - TRAINS 2

Here is Baldwin Engine 90 again, with the engineer featured.
Posted by debwardart at 9:54 AM 2 comments:

Since I'm not painting right now - too tired, too busy with other things for a while - I'm going to put up some "old" paintings that you might enjoy - and the subject will be TRAINS!
Several years ago my husband and I made a trip to Pennsylvania which took us to Johnstown (site of the famous Johnstown Flood); past the location of the crash of (9-11) Flight 93; Hershey (where we toured the factory and got chocolate!); Intercourse (yep, that’s really the name) and Bird in Hand, both Amish centers; and Chadd’s Ford, home of the Wyeths and their museum. We also went to Strasbourg, home of the railroad museum.

We took a train ride on an open car behind a steam engine through the Amish countryside. Wow, it was beautiful. I took quite a few pictures, but missed what would have been the best – as we rounded a curve there was an Amish farmer with horses and equipment hitched up – but I wasn’t as quick with my camera as the train was rounding the curve!

On the way home I “painted” a couple of the paintings in my head and, unbelievably, they turned out to be just as good on paper as they were in my head!

This is the front of the locomotive. It was painted on Saunders Waterford paper which is very soft. I like to glaze, and by the time I got to the final touches, just when I wanted to be very tiny and specific with my paint, the paper was as soft as a desk blotter. Just a tiny touch with the brush would cause an instant bleed.

After I finished this painting I knew I could truly handle watercolor!
Posted by debwardart at 9:00 AM 18 comments:

Wednesday I saw the cardiologist for a 2 week check up since my minor heart attack.

He had a motto at the hospital: “One step at a time.”

I found that I also have a motto: “All the steps, how many are there and which way do I turn when I get to the top.”

So I thought we might have a communication issue. However, he was great, as was his nurse. Apparently his motto only applies when the patient (ME!) might be in a life or death situation!

They answered my complete list of questions and took a lot of time with me. My BP was down to 110/60 – LOW! – on the 2nd reading, the first slightly higher. And apparently the problems I’ve been having with lightheadedness in mid-morning are due to one of the pills – which he said I should be taking at night! I was not told that nor was it on the pill bottle! If that doesn’t work, I can cut the pills in half and take ½ in the a.m. and ½ at bedtime, so it seems to be a solvable problem. And I just happen to have the niftiest pill cutter! It’s actually some construction tool for cutting wooden trim work, but it works great for pills – cuts them straight in half!

I also get to keep taking my Chewable Cherry Adult Baby Aspirin (oxymoron??) every morning. I told the nurse I let it dissolve on my tongue and think of a big, gooey cherry Danish! (She thought I was funny!)

The doctor also said it will take 4-6 weeks to feel “normal” – that puts my timeline around the ViewPoint opening! So hopefully I won’t fall off the box my husband has threatened to put at the podium to elevate me while I’m giving my speech! (Last year he told me I was a “disembodied voice” during the speech and he aims to fix that this year!)

Anyway – all of the info from the doctor is good stuff to know. Barring any unfortunate incidents, I’ll be heading back there in January.

So now, apparently all of my impending health hazards are back to where they belong – our highways and byways. I always claim that any car I drive or ride in becomes invisible – cases in point:

Tuesday the car in front of me on the expressway ramp came to a DEAD STOP on the expressway – I had nowhere to go since a semi was whizzing along in the left lane. I had to slam on my brakes and the instant the truck passed me I changed lanes. Thank goodness there was no traffic behind me. A few minutes later the same guy who couldn’t find his gas pedal at the end of the ramp whizzed past me! Jeeeeeeeeeeeez.

Wednesday a large truck got over for me to come down the ramp – and then promptly pulled back into my lane – guess he had a very short attention span! (He received a rather UN-ladylike gesture and horn toot as I slammed on my brakes and got behind him and then passed him). And then another large truck pulled into my lane and then back into his lane for no reason I could see.

Gee – that’s enough to give a girl a heart attack!
Posted by debwardart at 5:12 PM 10 comments: 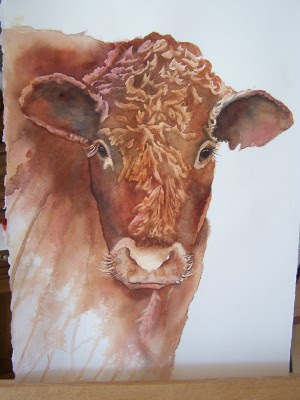 Meet Erin - she's our biggest gal - bossy as all get out!

Here's the progression of this painting: 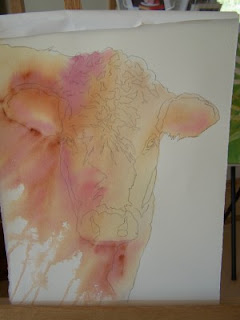 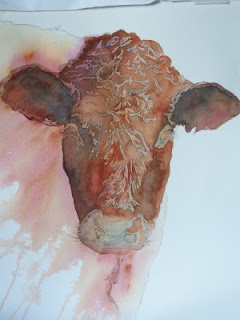 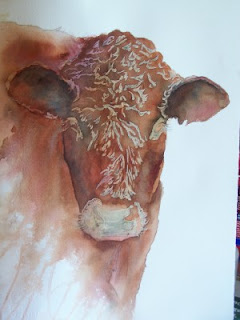 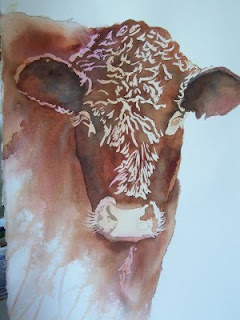 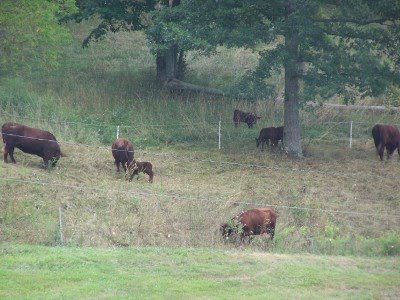 We had 5 babies this summer; sadly, one died. But we still have the 4 little ones who scamper around with their mothers! Here is a photo of most of the herd – you can see the little ones – and note that one is on the “wrong side of the fence” at the top middle of this photo. Guess he/she has heard the old saying “the grass is always greener on the other side of the fence!”
The babies will wander under the fence, but come back when momma calls them!!
Posted by debwardart at 9:26 AM 2 comments:

WHAT A DIFFERENCE A YEAR MAKES - SUNNY! 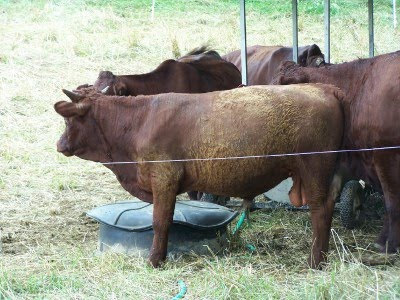 Nothing to do with art, just cows!
Some of you may remember the birth of our first calf, Sunny, a little over a year ago. Well, here is a short progression – what a difference a year makes!!!!! 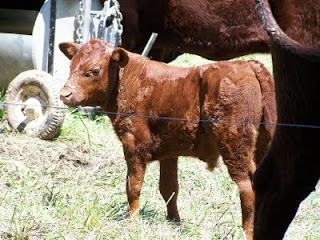 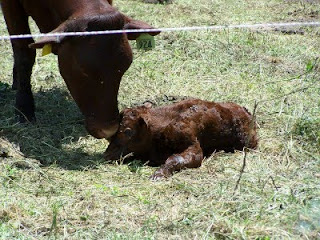 And – even though he’s an animal - he’s even got a birth certificate (imagine that!!!) 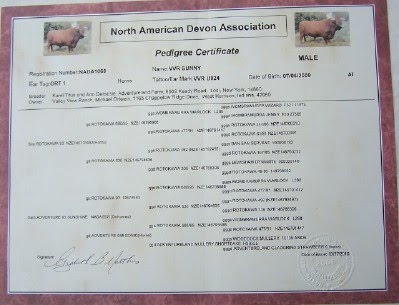 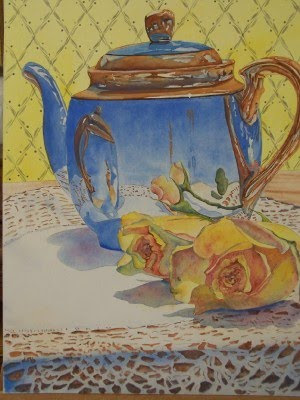 For the background I decided to do some “wallpaper”. A friend brought over some wallpaper samples and I reduced one of the patterns, then traced it onto vellum, then copied it onto 2 pieces of paper, then overlaid it on the painting, then traced it onto the painting, then miskited it, then applied 2-3 layers of yellow paint, then removed the miskit and then added the slight shadow behind the table edge and – voila!!!! This shows the miskit still applied.

And, finally, here is the almost completed piece. I’ll live with it until I’m sure it is finished, and then will use 3-4 layers of varnish to complete it.
Posted by debwardart at 9:07 AM 11 comments:

While you have been reading my posts which I had previously scheduled, I’ve spent 2 ½ days in the local hospitals with a minor heart attack (and had my first – and hopefully last! – ambulance ride).

The only reason I’m telling you this is so that the women reading this will realize that our symptoms can be very different from a man’s.

On Monday evening around 11:15, just as the local news was ending, my right bicep began to hurt. (Notice I said RIGHT bicep – i.e. not the heart side). I thought I had pulled a muscle. Later that night my upper back started to hurt and between my shoulder blades. Then I felt some chest pressure. Forget that “it felt like an elephant on my chest.” It was more like a 16 pound cat – I know this for a fact since I used to have a 16 pound cat that would sometimes sleep on my chest and wake me because I could not breathe! Then I had some slight pressure on my right neck. This is why I didn’t think it could be a heart attack – everything was on the wrong side of the body. So then I thought I was having an anxiety attack and the more I thought about it the more anxious I became! The symptoms alleviated, returned, changed pattern, etc.

At some point I decided it could be a heart attack so I made my peace and decided that if I was alive in the morning I would have my husband take me to the doctor.

Tuesday morning when he came in from moving the cows I was dressed and ready to go – called the doctor and we went there first. He assessed that I was having (or had already had) a heart attack and my husband drove me to the hospital. Only one problem – this is a local hospital and all they did was stabilize me – had we thought it out better we could have gone straight to Cincinnati to a cardiac care unit. Oh well . . .

After spending Tuesday there they transported me at 5 a.m. to Mercy Fairfield and I had a cardiac catheterization. The doctor said it was a minor attack in a minor artery and no point in putting in a stent – it is only about a 2% blockage.

However, I’m now on 3 medications for blood pressure, cholesterol and heart (thankfully CHEAP!) and a baby aspirin each day – I chose chewable cherry!

I did not know that I had high cholesterol and high blood pressure - that has always been low. Apparently this has been building for a while.

So, hopefully by following a strict diet plan and taking my medication I’ll be back to my usual self in no time. In the meantime, all I want to do is sleep!
Posted by debwardart at 6:15 PM 20 comments: 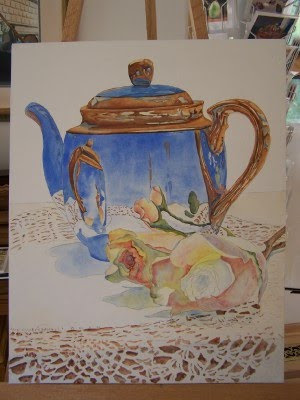 Sneaking up on those shadows in the roses, and adding some color to the "not lace"!  Also more color to the pot an some of the reflections painted in.
After the demo I received an email from someone who told me she tried to paint lace the next day and it was the first time she had been successful - due to the fact I talked about  painting "not lace" - it helped her understand negative painting!  That was cool!! 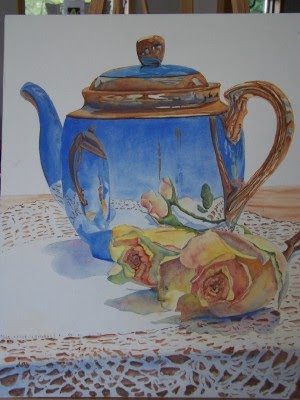