My husband built a new “shademobile” for the cattle, this one much sturdier than the old one, and, perhaps some of you remember the original with its umbrella???
Perhaps some of you farmers and farm gals out there are interested, or you are just a friend of Mike’s and want to learn what he’s up to now. If cows and equipment and inventions don’t interest you, then just skip the rest of this post!

Anyway, here’s a glimpse of the two shademobiles side by side, and it’s apparent that this one is built well, even, perhaps, overbuilt. But it has so far weathered our “severe thunderstorms with hail and damaging winds” as noted by the area forecasters, and it has done well. As you can see from the photo, the old one has survived a couple years in service but not without some severe damage to itself after similar storms. Mike will be rebuilding the roof on that one and it will service the “bull herd” we now have achieved. 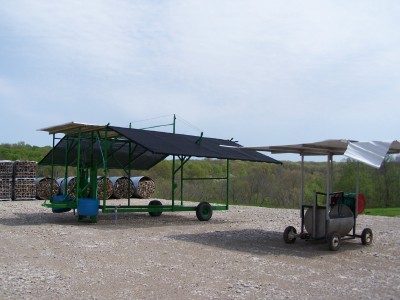 Here is the front, where you can see the two water containers (blue tubs) and a partial blue tub in the middle for hay. You will also note the long door on the front which is the head gate. It’s exactly what it sounds like – the cow sticks her head in there and then Mike can push it tight and then can milk her. (Maybe!!! – but only time will tell once she has had her calf). In the next photo the front is down and in the next it’s been cranked up so that it can be moved.

The “wings” of awning and the head gate are operated via cables. 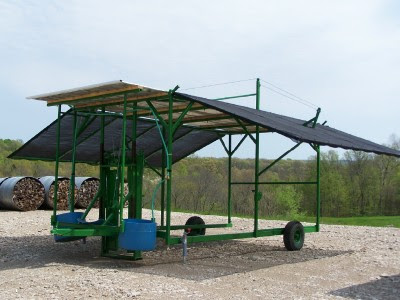 Here Mike is letting down the sides – he has a bracer bar that attaches to the side to hold the awning in place and you can see that hanging down in the middle of the awning. The bracer bar acts as a stabilizer for the awning when it is up. 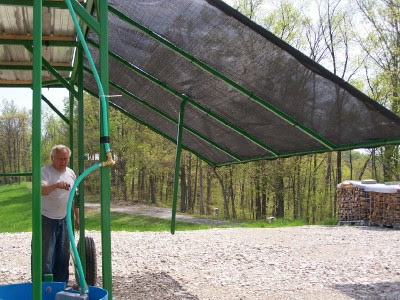 Here it is, ready to mooove. The tractor will be hooked up and then the two jacks on the front will be raised and he can haul it around the property. He has a series of underground pipes around the property that he can hook the hose to and the water tubs are made to swing freely, just as the old one did, so that they remain level even on all of our hills. 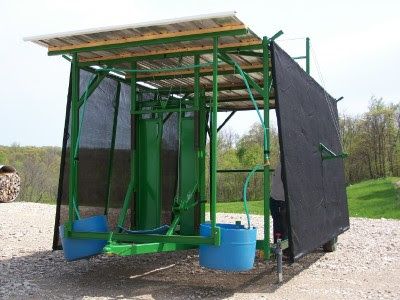 And, I know that some of you are wondering what in the heck those things are in the background of some of the photos. The round things are culverts which have been cut down to about 5 foot lengths and then filled with cut and split wood for winter. They work great! In our garage are 5 wooden carts that these can be put on (using the tractor with a "fork" implement) and as we use up the wood my husband and son move the empty culvert out and a new filled one in. Mike used to have to move the carts up and down the hill to fill them so this is a much better system. The square things are also wood carts that my son uses for firewood in the shop.

As Paul Harvey would have said – “and now you know the rest of the story”!
Posted by debwardart at 9:00 AM

Studio at the Farm said...

Not art, but interesting none the less. That is some HI TECH cow hardware!!

Deb, this is fascinating. Your husband is quite the inventor and builder!

Thanks for your comments - my husband will be pleased!

Mike is very inventive indeed! Those are lucky cows. Has he thought about patenting this contraption?

Kathy - I'll bring that to his attention!

I like it. All it needs now are some solar panels to run the milking machine. Ha!

Do you have to lock the water bins down once they are level? I would expect the cows to learn they can get fresh water by tipping the barrel. Clever, cows are ;-).