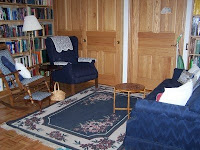 Just before getting sick I managed to get more of the studio/library organized. So, to make up for my horrific “before” pictures – here is an “after” picture.
One half of the room is now back to being a sitting area for the library – it’s amazing what some organization will do, isn’t it!
Managed to get my paintings into the closet, after “losing” some things that were in there.
I've made a quick trip to Ikea to look for some shelving to separate the two areas of the room and give me more storage space. Of course, my luck, the one thing I found isn't in stock and will have to be ordered, so I'm taking a bit more time to look around before I commit!
Please tell me it does look better! (my “before” photos are posted on February 11, 2009) .
Posted by debwardart at 1:10 PM No comments:

Ambulatory, stuffy and coughing, but once again I've survived the Cincinnati area "winter bug", thank goodness.
Of course, now I'm even further behind. But I've made an executive decision - rather than try to catch up, which is impossible, I'll just start from scratch - the old "today is the first day of the rest of my life" thing.
This isn't much of a post, I know, but it beats a blank and gets me back in the game!
More, and better, things to come soon, I promise!
Posted by debwardart at 6:26 PM 3 comments:

I belong to a few groups, and when I join something I like to get involved, but I may be a bit overextended at the moment, as they all seem to have something going on at the same time – spring being right around the corner. Plus I’m teaching classes, plus attempting to run a house (into the ground, apparently!) and I find myself not doing anything very well.

And, last but not least, I feel bad – as in SICK. Last week I was patting myself on the back feeling smug that I had not gotten the “winter illness”, even though my son was coughing and sneezing for several days. Well, guess what, I’ve got it now.

So I’m going to take a couple of days to slow down, maybe catch up on some of those art magazines, until I feel better. If you need me I’ll be buried under a soft comforter on the couch sipping hot tea and eating toast.
Posted by debwardart at 1:43 AM 3 comments:

The final few days of 2008 were spent CLEANING (YUK!) what I jokingly refer to as “my studio” which is really just part of the library that I took over when space ran out in my office (which will be the next thing that needs cleaning). So the studio/library is about ½ cleaned up. Took me 2 days to go through the books and after a friend sorted through them, then my daughter, I have one box of books to either donate or give away or burn, whichever comes first. But don’t worry, none of them are art books! At least the shelves look nicer. Now all (ALL???) I have to do is clean the rest of the room – and my office, and my closets and . . . . .
The worst thing about cleaning like this is that it will look worse before it looks better, since I have to move everything out to decide what to keep and then decide where to put it.
But, at least I’m doing something about it, while telling myself that I’ll never let it get this bad again of course - yeah, right??? (lol)
Several blogs have referred to cleaning up studios, etc. - seems like the beginning of a new year brings out our “nesting syndrome”. The photos posted below are some photos of my mess.
Do any of you allow your painting or living areas to get into this horrific state of disaster, too? Let me know that I’m not the only one – PLEASE! 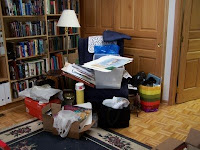 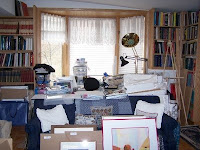 NOTE: By posting these photos perhaps the humiliation will force me to clean up quickly in order to post the “after” photos. Please don’t think too badly of me!
On the upside – don’t my shelves (below) look neat!!! 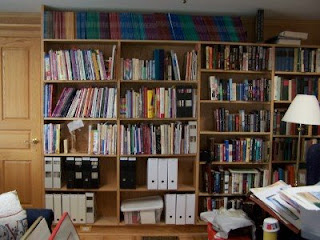 Posted by debwardart at 4:56 PM No comments:

This is the third year I have participated in an art fair at a local church. Last year and this year I did a demonstration of watercolor. I hung last year’s painting in my booth – it was “Frank’s Apples”. (See my post from May 6, 2008). This year I worked on a basket of flowers, and will be posting that at some point.

A friend of mine, Shirley, also had a booth. Both of our husbands helped us set up the night before and then we went out to dinner. During the day on Saturday she and I got to chat a bit with each other, and there were a couple other artists there who I know, so it made for a pleasant day.

Demonstrating draws people to you, of course. A few years ago I would have been way too shy and self-conscious to paint in public, but now it doesn’t bother me at all. The best audience seems to be the kids! They have no qualms about telling you either what you are doing wrong or, on the other hand, how much they like it. Plus, doing something besides sitting around all day makes the day go faster. And Saturday just flew by! So many folks stopped by to chat, a few to buy (yippee) and some, of course, just to pass the time – and let me know that they/their sister/friend/aunt/nephew etc. was also a painter!

I was dreading the tear down because I’m on my own at the end of the day (my husband doesn’t do that part – and truly the only reason he helps me set up is because I treat him to dinner!!!). I was in the basement this year and had resigned myself to 6 or 7 trips up and down the stairs – but Shirley and her husband showed up to help me! So it only took us 2 trips! They are really great people!

Since I did fairly well this year, guess I’ll try to enter again next year!
Posted by debwardart at 12:38 AM No comments:

Last summer a friend and I went to an art expo in the Chicago area and met artist Karen Vernon (www.karenvernon.com). We were both surprised and impressed by how approachable and kind she was.

If you are not familiar with her, she does work on the hard board sold by Ampersand – used to be called claybord but is now “Aquabord”. She took a lot of time with us to explain how she used the boards, gave us her business card and said to give her a call if we had any questions!

It took us a while to get around to using the boards we purchased, but finally we have. We set up our own “painting challenge” – we would use the same photo but interpret it any way we wanted. I chose to use the photo pretty much “as is” (gee, that should come as no surprise to you!) while she chose to crop the photo top and bottom and create a horizontal painting. She also decided to tape the painting (this means using masking tape as the resist, rather than miskit) while I chose to use a bit of miskit at the beginning.

Here is mine. (The photo is from my daughter’s trip to Italy a few years ago, and I’m not sure where this was taken – and when I asked her the other day she didn’t know either – so I’m guessing Venice???) 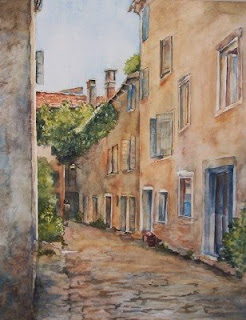 I miskited a few areas on the tops of the roof, the sunlight on the ground in the foreground and around the bush area and the figure. Then I got out some sedimentary colors and began slopping on paint, very water-y. I wanted the warmer colors in the center and focal area and then the cooler colors to surround that.

I like to glaze, and had read that was possible to do on the board, but at first I found it to be hard not to pull up the underlying color, even using a very soft brush. (One of the features of the board is that, like Yupo, it’s possible to wipe back to the white of the board, which means that the paint is very lift-able). Seems like the following day it was OK – I’m thinking that even though it felt dry at first, it takes that surface longer to get totally dry. (Things to learn about!)

I’m happy with it. You can’t tell in the photo, but up close there is a lot of texture on the left building and cobbles, just due to the nature of the paints. I did not use anything else to create texture.

Here is my friend’s painting – she had some trouble with the paint creeping under the tape, but that is pretty normal for the taping technique. 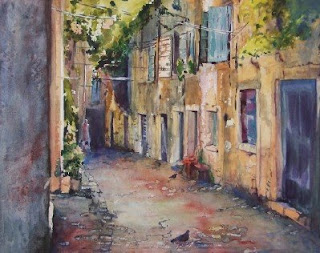 Let me know what you think!
Posted by debwardart at 4:46 PM 5 comments:

Just so you know I'm still here!
Last week I spent a few days in Atlanta, GA - lovely dry weather - then back home, via ice stricken Kentucky, and our snow and ice was mostly gone, until . . . .
today - SNOW AGAIN. If you want to see what it looks like here, check out my previous post, then put a piece of white paper over the pictures and that's what I can see when looking out of the window!!!
Our local watercolor society had to cancel January and now February meetings due to weather. So, instead of going to the meeting tomorrow and talking to everyone about the spring show (of which I'm chairperson again this year) guess I'll just have to email, mail or call with information.
On the upside, I've got a painting started that I'll be posting in the next few days, and another one completed!
So, once I get caught up with "life" there will be lots more to see here (I promise!)
NOTE: Once again, I've been lax about my postings, so got to keep them coming - can't let 6 days go by again!
Posted by debwardart at 5:34 PM No comments: