As I prepare to leave on my annual painting retreat - I won't leave  you hanging over Sparkles' health.

After several days having pills blown into her mouth while the herd looked on, Sparkles is now up and walking, although still limping on one leg.  This has got to be a good sign!

When I return late next week I'll see how she's doing and if she's still doing well, I think we can safely say that Dr. Mike did the trick (with a little help from the vet and his wife!!!)

Hopefully I will also return with some painting photos to share.

Stay tuned and have a great week (or more!)  I know that I will!
Posted by debwardart at 9:00 AM 3 comments:

AN ADVENTURE WITH MIKE

And so my day began – quiet, stretching before me with a list of “to do” items, the top one of which was to complete a watercolor drawing.

It looked like it was not going to be such a good day for my husband.

As soon as I got down the steps I saw a wallet sitting on the dining table – uh oh – my husband was off running errands which included breakfast at Frisch’s (a local eatery that is part of the “Big Boy” chain). Something told me his plan was foiled!!!! I called him and as soon as he answered he said “I know, I forgot my wallet.” But, turns out that he was able to run 3 of his errands AND have breakfast – one of the places he frequents (Bud Herbert Motors in Harrison, OH) gave him a $10 “advance” on his account! It pays to know people – and spend lots and lots of money on John Deere equipment!!!

After that crisis was averted, and following breakfast and dressing, I was peacefully sitting at the table when the phone rang – and it was my husband.

Turns out it was also not going to be such a good day for me – for I was needed as a chauffeur for him – and his CALF.

The little one was born a few days ago and since the cows are always in the field, and since we have lots of steep hills, and since little ones are a bit shy and hide in the grass their first few days of life, and since they can’t walk real well yet, this one managed to slide under the fence, down the hill and into a ravine. Mike had carried it back to its mama and thought all was well. Turns out, yesterday afternoon he realized the calf could not stand, but it was too late to call the vet. So he called this morning and spoke to the vet and was told that “pasture calls” were not made today and to bring the calf in. So . . .

. . . he put down one car seat and covered all the back with plastic and a blanket. Then he and my son went into the field and put the calf into the John Deere Gator and brought it up to the car and transferred it into the back.


The hatch was lowered, my husband climbed in, windows were lowered (although there really was no smell – little calves, like deer fawns – really have no odor – it’s a protective device until they are big enough to run with the herd) and we were off. I was driving very carefully around curves and maintaining the actual speed limit – which was a good thing because about two miles down the road, suddenly and without warning, a deer leaped out of a corn field and onto the road directly in front of me. Brakes were slammed, calf was slid, deer was avoided, and we drove on.

We arrived at the vet’s office in plenty of time and when the vet got there he brought out his protégé and gave him a quiz – he offered to buy lunch if the young man could tell him what kind of calf this was. The young man needed several clues before he came up with Red Devon!
﻿﻿﻿

We thought the calf had broken a leg, but as the examination (I’m leaving out the gross parts – and believe me, they were GROSS) ensued it turned out she has a septic infection which settled in her legs due to an infected umbilical cord. Several shots of powerful antibiotics to fight the infection, some vitamins, some pills and a small bowel movement (which was kept to the blanket, thanks to my rapid intervention) later we were sent back home.

We stopped at the shop for a length of plastic pipe, the other workshop for my husband to wash the affected area(s) of the calf (DON’T ASK) and then it was back to the pasture.
This was amazing. The cows were laying down chewing their cud and mama Sunshine was farther down the field. Mike set the calf down and walked down to the mama – said her name a few times and said “come on” and darned if she didn’t begin following him – right up the hill to her baby. I didn’t get a photo of that because I didn’t think to have my camera out – but it was really cool to watch.

We shook out the blanket to be washed immediately, the plastic was burned, the back of the car sprayed with insecticide (DON’T ASK!!!!!) and left to air out.

At this point Mike has to give the calf pills twice a day – via the plastic tube! He inserts the pill, cut in half, sticks it down her throat, blows and down goes the pill! (I told him he might want to mark which end of the tube goes in which mouth . . . )

P.S. - - The calf has been named “Sparkles” by my son’s girlfriend’s nieces – we hope she makes it.

P.P.S. - - Sparkles never made a sound and just laid there like the Queen of Sheba on her blanket!

Sorry I have been tardy with responses to your comments, and with posts.

Blame it on the Internet (not me personally).

Lately I either can't get onto the internet at all, or it's slower than pouring molasses in January.  I think sending smoke signals might be quicker.

I think it can mainly be blamed on Yahoo - which is apparently messing around with their programs, as far as I can tell.

If I can ever get back into my emails - which I can see listed - and actually receive and respond to them - which I'm currently unable to do, even though Yahoo says that their new email will be "quicker" (laughing out loud while sobbing profusely) - I'll be back to sending and receiving and getting onto the blog more frequently.

If anyone has any suggestions as to how to resolve my problems (that don't include violence!!!!!) please let me know.

Until then - hang in there - there has got to be a solution to this.

In other news - - - I found out that my painting "Red Paisley Scarf" has been selected for the Ohio Watercolor Society show this year!  So - there is some good news in my life!!
Posted by debwardart at 11:39 AM 4 comments: 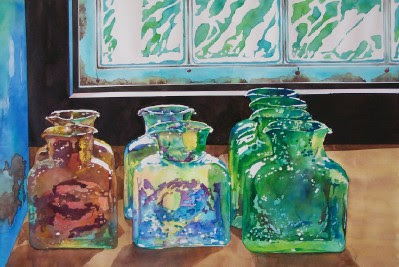 Then I peeled off the drafting tape and miskit. I added just a tiny bit of color to the white on the window sill. Removing the miskit from the bottles makes them pop a bit more.

At this point I’m living with it.

I think it needs some more color in the white in the window and I may drip some blue in there.
Posted by debwardart at 9:00 AM 7 comments:


Then I began working on the brown bottles on the left.  After more tweaking of the colors I was satisified with the bottles. 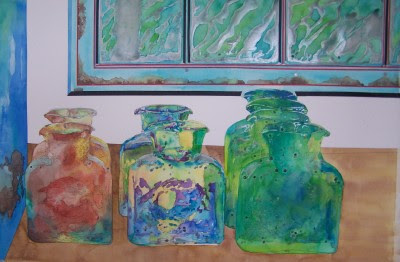 Next I added the dark of the window, using black and brown ink. 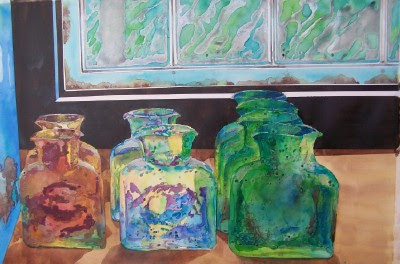 I finished the center bottles, and think they got a bit too much color in them. Then I worked on the ones on the right which were a vivid green. 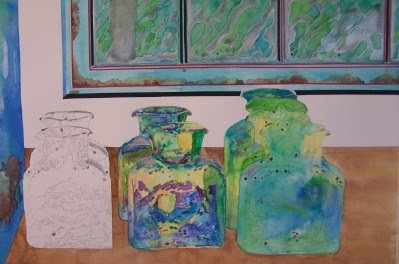 
I peeled off the Scotch tape and put down more along the line for the windowsill. I laid in a mixture of yellow and brown for the windowsill, waited a few minutes for that to become almost dry, and then began working on the clear bottles in the middle. I’m hoping this will work out OK – as always at this stage of a painting! 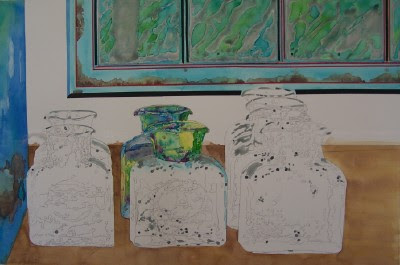 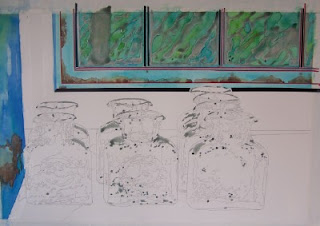 I then began adding in color. This photo represents about 3 layers of color. These DPM inks aren’t as vivid as I thought they would be, or else I’m watering them down too much. Like I said, this is all new to me so if the painting turns out well, great, but if not, it was a learning experience.
Posted by debwardart at 9:00 AM No comments: 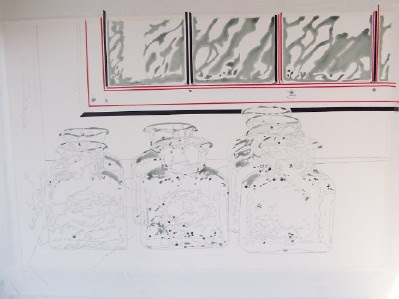 I then laid in the miskit – and found out that one of my bottles of miskit had gone bad - it was the Winsor & Newton white miskit. Any time I use any of the white miskits, no matter the brand, it seems they don’t last very long before they go “beige” and clumpy. Have no idea why that would be (if anyone has the answer, please let me know).

For some of the areas in the window I used some drafting tapes that come in a roll in various widths. I’ve had these forever, but never used them. This proves that it’s always good to buy things you don’t really need, but think you might some day use, to stick in your paint supplies so they will be there whenever you need them!

I used regular old Scotch tape – yep, the transparent kind we all have in our desks – on the lines for the left side where the blue is.
Posted by debwardart at 9:00 AM 6 comments: