Last week I was out with my daughter and we went to the local Old Tyme Pottery so she could pick up some inexpensive glassware. I should have known . . . (you know where this is going!!!)

She spent probably $12 total, if that. I, on the other hand, found numerous items for still life set ups. I’m really enjoying doing still life (never would have thought it!) but never can find interesting enough items. Well, about $60 later, I had many neat items to work with. I was so excited that I stopped at the grocery on the way home and picked up a couple bouquets to utilize, too. The plan was to take many photos the next day. However . . . The next day the sun never came out. Ditto for the next several days. But the flowers hung on for dear life.

Finally, though, the sun came out and I took almost 200 photos of many set ups. (I told you I was excited!). Now to edit them and get some new paintings started . . .

Soon I hope to have some new and awesome still lifes to show you – just don’t hold your breath!

Just so I'd have a photo with my post, here is a tray of glass ornaments (I was thinking reflections though, not Christmas!) 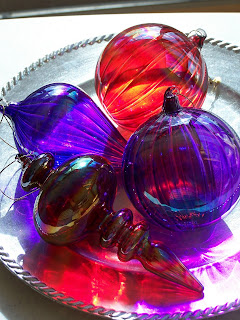 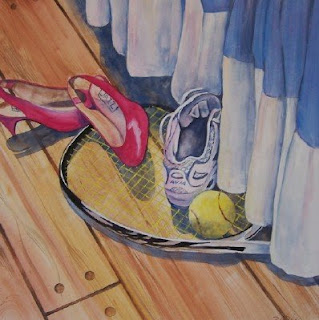 This is the first time I’ve done a painting to the specifications of a “challenge”. This one was to include one or more of the following: wood, a shoe, a sphere, something yellow and something from the refrigerator. Got all but the frig item. It did not win an award, but overall I’m pretty happy with it. 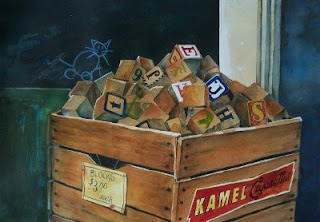 I’ve been painting with fluid acrylics for well over two years, but I’m hearing more and more about them now in the art magazines. I do enjoy using them, on watercolor paper or board or on canvas. (Just can’t seem to get the hang of tube acrylics, tho.)

In any event, most of you have probably heard of Nicholas Simmons by now. Seems that he discovered a painting technique that involves painting with the fluid acrylics and then, just before the paint is dry, spraying it off so that some of the paint lifts off with the water which creates a splotchy look reminiscent of batik.

This painting, done in fluid acrylics and watercolor, utilizes the “Nicholas Simmons” technique in a few areas. It seems a bit darker than I usually paint, but I’m pretty happy with the results!

This painting is also in the Queen City Art Club’s show at Baker-Hunt in Covington, KY. 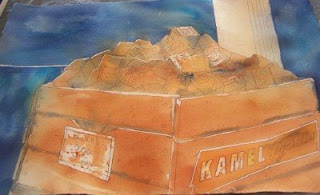 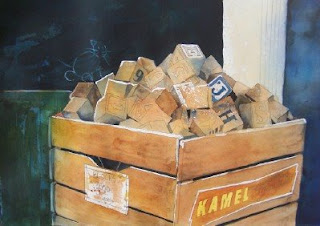 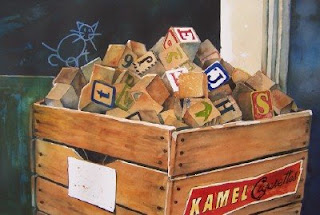 Friday evening was the opening of the Queen City Art Club show at Baker-Hunt in Covington, KY. One of my paintings was featured on the postcard for the show, which was an honor, since I'm one of the newest members of the club.

We had a good turn out - I got to talk to several people I don't get to see enough of, and my husband got to gorge on some delicious snacks and talk to some interesting people, too.

They had a "bazaar" table with small items on it, and some of those items sold. I'm not aware that any of the large paintings have sold, though. Sadly, people will spend money on so many things that they won't even use, but not spend any money on artwork which they can enjoy every day of their lives. 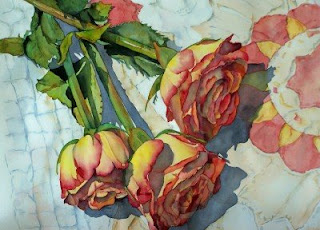 This is the painting on the postcard - "Roses on Grandma's Quilt", watercolor.
Posted by debwardart at 2:05 PM 2 comments:

It’s been quite a week, both personally and artistically.

Last Wednesday I started the day with a colonoscopy (yippee!). While the outcome was fine, I seem to always have a problem with anesthesia, so the rest of that day was a write off, which meant that I missed a funeral visitation that evening. Ordinarily that wouldn’t bother me, but the deceased was a good friend of my husband who had died quite suddenly and I was sad that I was unable to attend. However, once Wednesday was over, my week got better!

Friday evening I attended Viewpoint, a national competition sponsored by The Cincinnati Art Club, of which I am a member. Unfortunately, the painting I had entered was not accepted; however, my friend Sharon had a painting in the exhibit. It is the painting on top left – African boys in a circle – entitled “Circle of Friends” (watercolor). She won a magazine award for it! 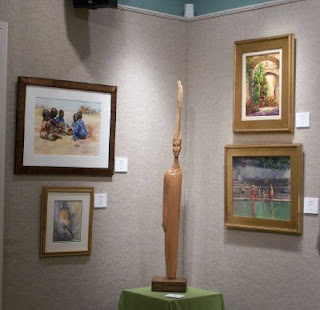 There were quite a few more gorgeous paintings (and hopefully these two artists will not mind their paintings being shown here - I have purposely kept them small).

Here is Ray Hassard’s “West Meets East” (pastel) for which he won a one year gallery representation. He does wonderful work, so much detail - this was framed as though you were actually looking into the window of the shop!

Another painting that caught my eye was Cindy Brabec-King’s “Belonging Unto Him" (watercolor). I have admired her work in magazines and books for years - this painting has so much going on and is quite beautiful up close and personal! Sadly, it did not win an award. 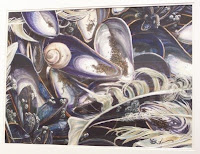 I tried to get more photos, but by the time I had walked around the exhibit and began my second go around with camera at the ready it was getting too crowded to get good pictures. So I must make a “memo to self” for future exhibits – get there early and take my photos right away!
Then on Saturday morning I taught a class at the local library – sunflowers in watercolor. Wow – they all did such a great job – either there were lots of talented people there, or they had a great teacher (ha, ha!). Once again, I meant to get some photos of the class, but we had more people attend than we thought and it was kind of a whirlwind to get everything completed in 3 hours – maybe next time.

This week I have two art club meetings and two art openings this weekend! I always enjoy art openings – such a pleasant way to spend an evening! Now if my paintings would just sell . . .

We passed this barn by the side of the road each time we came and went from Norris Lake this summer. One day the cows were there so I snapped a photo. Just had to – my husband is in the process of purchasing beef cattle! (Can't wait????) 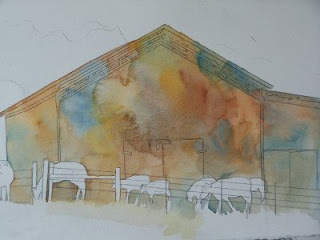 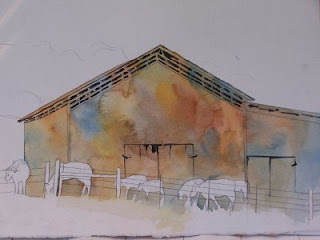 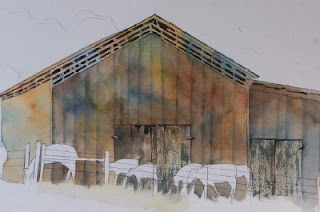