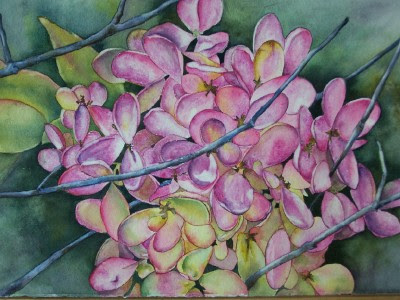 Finally, more darks to the background.
Not great, certainly not frame-worthy! But probably a do-over in the future because I really like the idea; just didn’t get down on paper what’s in my head!
Posted by debwardart at 9:18 AM 10 comments: 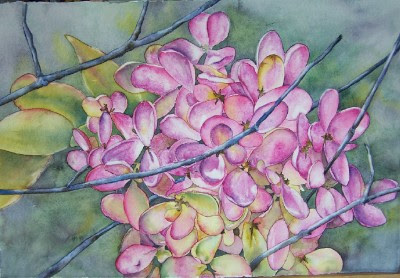 Then it was time to tie some of this together, since I think it looked too haphazard with each flower part painted separately, although I liked the look. So I began deciding which parts went together and giving more shade and depth to the flowers, and then added more color to the stems.
Posted by debwardart at 9:15 AM 3 comments: 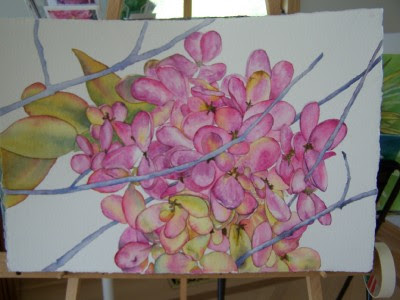 After I had the flowers completed (or so I thought) I added the stems. Then I realized that the flower was almost a ball which did not look good, so I added a few more flowerettes (is that what you call it on a flower like a hydrangea or a lilac???) 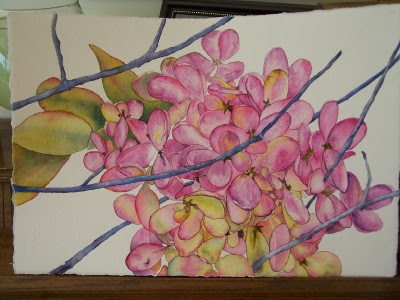 This is an attempt to utilize some of the info I learned at the Nick Simmons w/s this spring.
I am using the “cell painting” idea – painting each little area by itself. I love doing this although it takes a while! 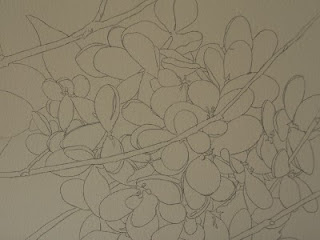 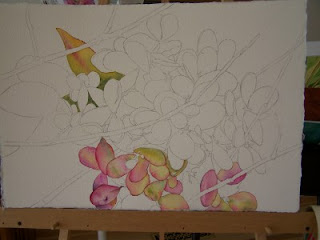 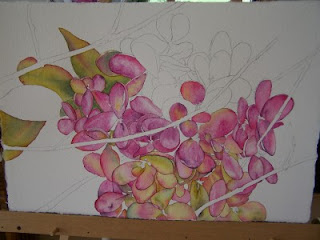 Today we buried my husband’s mother at 98. She lived a long, and by most standards, uneventful life, but it was filled with love of her family. She had obvioiusly touched many lives - we were surprised today by the number of people who attended the visitation and the length of the funeral procession.
Her nephew, a priest, said the Mass. Some of her grandchildren read the scriptures. Some of her grandchildren were pallbearers, my son included. My daughter styled her hair and painted her nails for the last time so she would look beautiful in the casket. The service was held at the church she attended for most of her life. I think she would have been proud and happy with the service.
Farewell Henrietta, you will be remembered with love.
Posted by debwardart at 7:07 PM 10 comments: 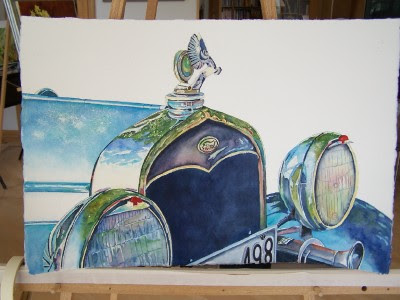 Well, I’m not unhappy with this one, but not sure what to do with the background.
My husband says to make a “mansion” in the background with a driveway sweeping down toward the car; my friend says if I do that she will never speak to me again! What’s a gal to do??? I think this one may sit a while and/or never be completed!

You know how some folks call their paintings “Untitled” (which bugs me!!). Well, guess I could call this one “Unfinished”!!!

I haven’t painted a car for quite a while and thought I’d like to do another one. So I picked this old Ford that I photographed at the local farm machinery show a couple of years ago. 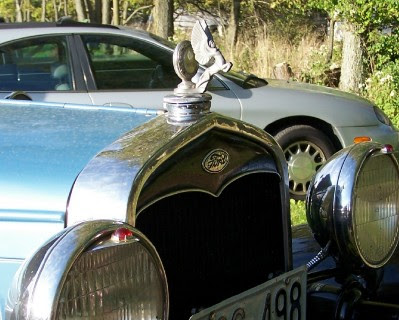 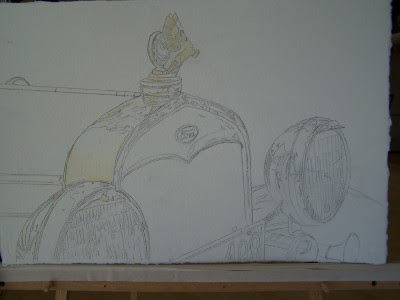 As usual, I began by laying in some thin washes and then zeroing in on one area at a time. 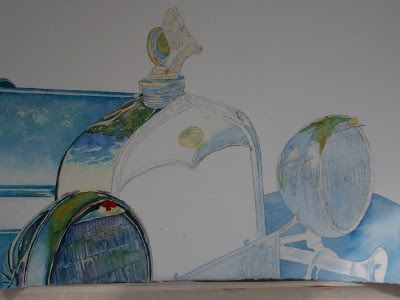 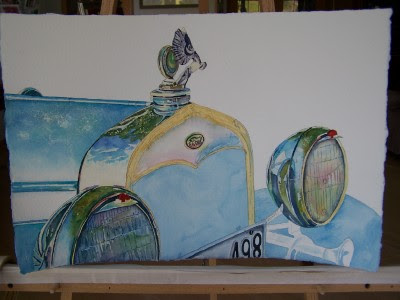 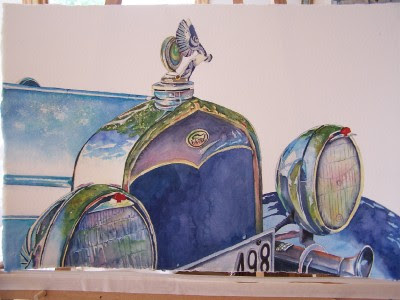 HOW I SPENT MY WEEK - VIEWPOINT SHOW

This week my “work week” began on Saturday – at the Cincinnati Art Club with some prearranged helpers and a few who recruited themselves! – opening the shipped work for ViewPoint.
Sunday required a few phone calls and emails to keep the ViewPoint show on track.
Monday - up to the art club to receive the dropped off paintings. I took a book to read to occupy myself – sounds boring, doesn’t it? Well, seems I know many of the artists and it was fun to take a few minutes to chat with each (some a bit more than a few minutes!) – so I never even had time to begin my book!
Tuesday – easy day - went to have copies of the show program made
Wednesday – to the Art Club for the awards judging. Nita Leland scared the pants off of me at one point, but other than that, the day went well. Nita was very informative about the jurying process and I enjoyed seeing her again. After she left I tagged all of the artwork; then it was home to begin working on the awards list and making phone calls.
Thursday – I took care of putting together all of the awards, making and receiving phone calls and getting everything organized for Friday night.
Friday – the big day! As I say, the show is kind of like a Thanksgiving dinner – there are so many parts to it but they all have to come together at one moment in time. We loaded the door prize, plus the awards, into the car and got to the art club early, even with a "Friday night traffic jam"!  Just in time to figure out how to put together the easel which was the door prize – and then people began walking in the door.
I’m told that at one point people were waiting in line to get in! I knew it was crowded - I’ll take that as a great tribute on a well received show!

Winners will be listed, with photos, on the CAC website – click on ViewPoint - but give us a few days since our webmaster is out of town – by mid to late week those photos should be up  – and I’ll put up a link on the sidebar.
If you live in the Greater Cincinnati area, please stop in – weekends 2-5.

Got another busy week this week, and then I may take a little rest!
Posted by debwardart at 12:46 PM 3 comments: