Some of the roses are complete, some still need a bit more work,and more leaves, plus the vase and silver charger need to be worked on.
Posted by debwardart at 9:00 AM No comments:

It's coming along and so far I'm happy with it!
Posted by debwardart at 9:00 AM 2 comments:

While on my recent art retreat, I brought along a photo of my daughter's wedding bouquet.  I've been meaning to paint this for the past few years and finally decided that now was the time. 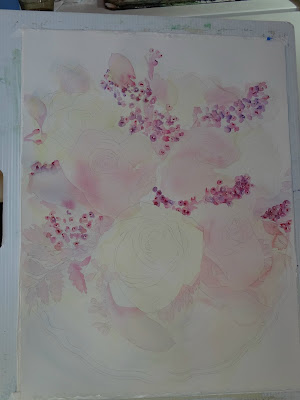 Here is the beginning of the painting.  The roses were pale and I really wanted to keep them that way. There will not be a background on this painting.
Posted by debwardart at 9:00 AM 1 comment:

September 2 was our 39th wedding anniversary and my 39th birthday!  (Imagine that coincidence!)

To celebrate we drove to Ainsley's restaurant on Brookville Lake.  We had not been there for several years, and they have done some updating which was a pleasant surprise.

Thursday evening was in the 70's with a nice breeze so we were able to eat outside - as far as I'm concerned, the only place to eat there - with a view of the marina and lake.  So Mike, myself and a million mosquitoes enjoyed a leisurely dinner!  (Actually the  mosquitoes weren't bad due to the breeze, but there were little swarms of them all around - I suppose their last "harrah" before summer's end.)

I find this place so relaxing. The boats, sounds and smells of the lake remind me of dining at a Florida restaurant, so I always feel like I'm on a little vacation when we eat here.

Before dinner began I sent my daughter a quick text telling her where we were.  There ensued some bantering texts between the two of us - and I sent her some photos of our delicious dinners just to egg her on, so to speak!  (Hey - when you add several years to my birthday wishes, anything is fair game!)

Below you will see some of the photos of our pleasant evening. 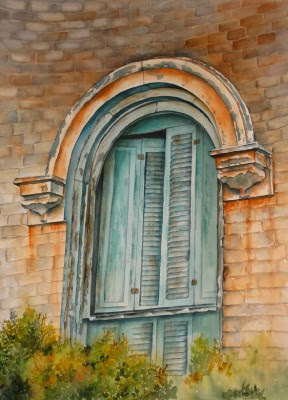 Well, this is final, whether good or bad.  (The painting has not been flattened, so there is a bit of a curl if it looks a bit odd!)

I kind of lost my enthusiasm as it kept getting darker and darker.

I did try to lighten a bit on the upper left.

Oh well, it is what it is.  Definitely not a show stopper!

I'll probably try it again in the future.

A friend critiqued the painting and let me know that there was a line that followed the crack in the upper white dome straight up through the bricks and off the page!  Until she said that I hadn't noticed; then it was all I could see (of course). 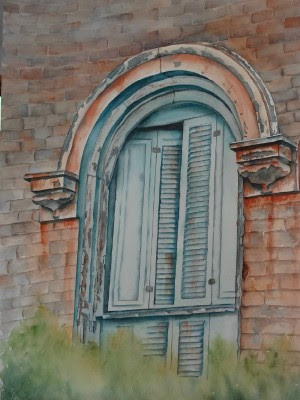 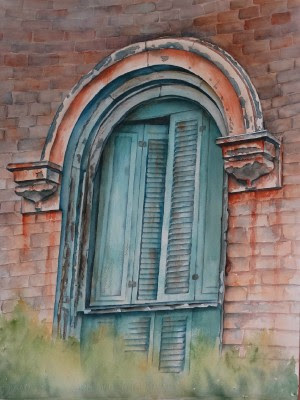 Then it dawned on me how dark this painting is getting.  Yikes.  Will have to decide if I want it to be lighter, as it actually was with the whitewashed brick, or if this darker is OK with me.

Stay tuned.
Posted by debwardart at 9:00 AM 3 comments: