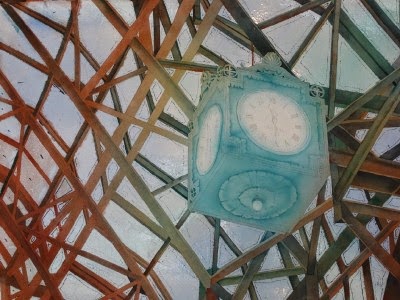 Continuing to sharpen features.
Posted by debwardart at 9:00 AM 2 comments: 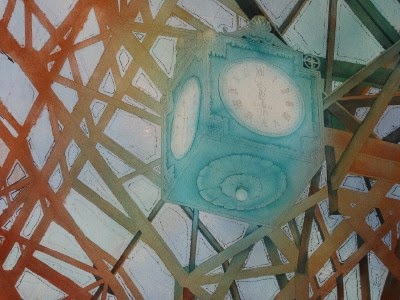 I began sharpening the girders and the clock features.
Posted by debwardart at 9:00 AM 2 comments: 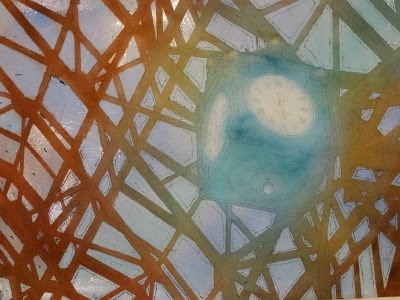 Now I used clear tape over the shapes between the girders, then applied more color in a “bullseye” around the clock.
Posted by debwardart at 9:00 AM No comments: 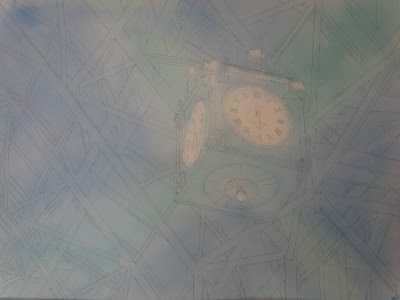 I wet the paper and placed a wash of blues around the clock, blotting the face when the paint ran in.
Posted by debwardart at 9:00 AM 3 comments: 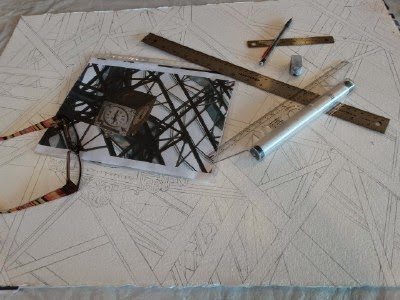 I enlarged the photo and then used a rolling ruler and two straight edges to sharpen up all of those lines! 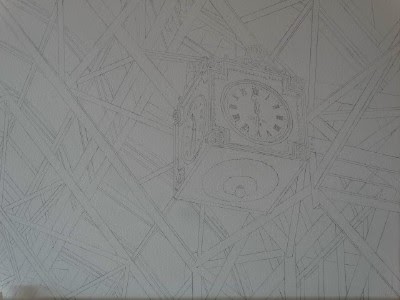 Finally I had the drawing ready.  It sat on my easel for at least a day so I could study it as I walked by, to make sure it made sense.

A few years ago I took a trip to with a friend.  We spent the weekend with her wild and crazy cousin and had a blast!

I was like a country mouse in the city.

We took the El train into downtown – a totally new experience for me.  I was confused by the train – not realizing I could simply open the door between cars even though it said “Do not Open While Train is in Motion” – or something like that.  So, when the other two went through the door and it closed on me I was in shock and yelled for my friend.  Of course, that alerted passengers in that car that something was going on and pretty much anyone within earshot – about half the car – looked up at me.  The other two found this incredibly funny and they doubled over in laughter.  I was embarrassed at that point, but later in the day I just laughed at that, along with all of the other stupid things we did.

We rode in a taxi – again, not something I’m used to.  All 3 of us crammed into the backseat, sitting on each others laps and hugging to make room!

We took funny photos of ourselves under and around “The Bean” at .

We made goofy poses in front of the lions at the Art Museum.

I recall some skipping and possibly singing, too!

Remember those folks who were alerted on the train when the door closed on me?  Well, when we got to the train station I looked up and saw this cool clock, and all the girders, and thought “now that would make a painting some day.”  So there I stood, photographing what, to a person, would be the rafters.

Two women from the train walked past me, and as they did so, one said to the other "Look, there's that odd woman from the train.  Look, she's taking pictures of the roof." 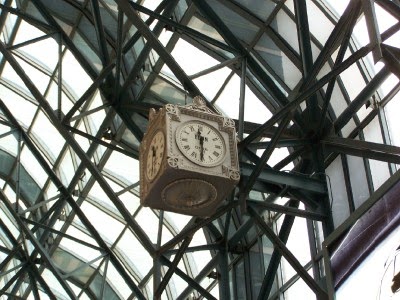 And that’s how this painting began!