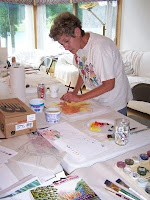 The second batik workshop was this past weekend and I did remember my camera! I even remembered to take a few photos! 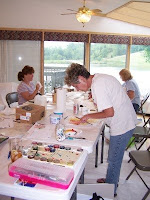 Here are some of the ladies diligently working on their masterpieces. 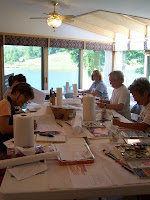 I set up in my living room for painting, and we had just enough room. 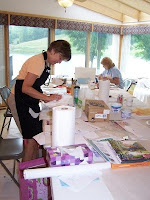 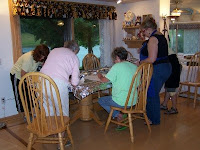 Here they are waxing in the dining room. Drying took place in the laundry room and ironing in the kitchen!
It's a process, that's for sure!

Here are some of the paintings in progress below. The bird's nest is taken from a magazine photo and Diane added the branches. (These are all for both educational and personal use, so that is not a problem). 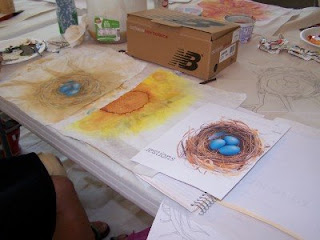 Below is Teresa's sunflower. 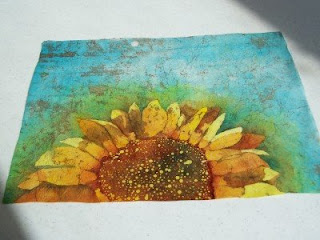 Here is Diane's bird's nest - it makes me think I'm in the tree looking down at it! 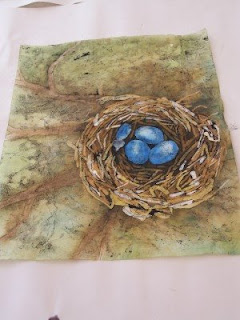 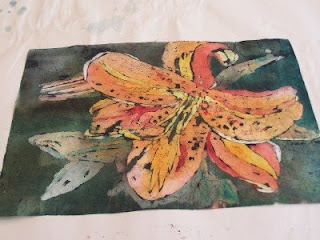 I forgot to get photos of all of the paintings before they left for the day, but overall I think they all were happy with their completed paintings - they left with smiles on their faces!
Posted by debwardart at 2:40 PM 9 comments:

I spent part of last week cleaning the house in preparation for my first weekend workshop (ever!) in watercolor batik, and spent some time setting up all of the tables, chairs and supplies while my husband and son “spiffed up” the outside!

Anyway, Saturday morning I calmed my fears – after all, I’m the one teaching this, in my own home, what do I have to be nervous about??? (Other than – will they get lost, will they like me, will they learn anything, will they think I’m a bad teacher, etc. – you may be seeing some of my insecurities here!)

My worries proved to be unfounded. They didn’t get lost, I think they liked me and they learned something! And thankfully it was “do as I say and not as I do” because my painting was horrible on Saturday, although I redeemed myself a bit on Sunday!

But, like the dunce I am – I forgot to take a single photo! Next week I will, tho (at least I think I will remember, maybe???)

To see information about this weekend's workshop - check out Rhonda Carpenter's blog. Rhonda attended the workshop and was smart enough to bring (and use!) a camera (unlike me, the teacher - DUH). Rhonda took photos of her work in progress that you may be interested in seeing.

I spent part of Wednesday with Rhonda Carpenter who so graciously agreed to give me some pointers on blogging. Joyce from the GCWS joined us for part of the day, but when she had to leave early the session became my own private class at a "blog-i-versity"!!!
Not only did I get to learn something new, and hope to put those things into practice soon (Rhonda, note how I highlighted you!!!!) but I also got to see in person the original paintings she has received from Mryna Wacknov, Carol Carter and Chris Beck. I cannot believe how small Chris' is, and how skillfully it was completed - just beautiful!
Thanks to Jerry, too! (I think I kept him from his lunch, but he was too kind to say it!)

Today my husband, son and myself spent the day cleaning up this place inside and out in preparation for my batik workshop this weekend. Hope the sun is shining all weekend! I'm excited!
Posted by debwardart at 5:26 PM 1 comment: 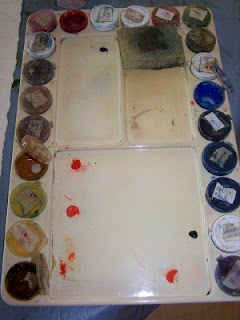 The other day I couldn’t stand looking at my palette – just had to wash it off and clean it up – which got me to thinking that I should share the following info with you:
Here is a photo (and this photo is of the cleaned up version, believe it or not!) of the palette I usually use – it’s called a “Possum Palette” – and is a bit more expensive than traditional palettes. I have been using this one for quite a few years.
As you can see, it has round cups that fit into depressions around the palette. The cups are plastic with attached lids – I have a few of them open in the photo. (The only problem with mine is that the cups will fall out if I tilt the palette – the newer models have a ridge in the cup holder area and they won’t fall out).
It comes with 22 cups, but you can purchase more (I think they come 8 cups in a plastic box).
There are a few things I love about this palette: (1) the paint tends to stay moist for much longer periods in the cups; (2) I am not locked into using paints previously squeezed out into my palette – it’s so easy to pull out one cup and insert another; and (3) since I sometimes paint on more than one painting at a time – it’s great to pull cups out and place them into a butcher tray for different paintings.
I am personally responsible for 30+ people buying these palettes – hint, hint to the company!!! If you want one you can purchase it from Daniel Smith or Cheap Joe’s (wait for a sale for a better price!!!)
I also like the butcher trays, but have recently found another product – it’s plastic and a bit cheaper and does not have that curve in the center that you seem to have with the butcher trays. It’s made by Mijello and is called a peelable palette – since you can peel off traditional acrylics. (That does not work for my fluid acrylics, though; I just wipe them off and hope for the best!). It works just fine for my watercolors, too. I’m pretty sure I got it at ASW (or maybe it was Jerry’s).
Anyway – just thought I would share!
P.S. - SUNNY (as my husband says he will be named) is doing fine - getting bigger - but I only see him in the evening when we take our gator ride and my camera will not take photos in low light, never has and apparently never will. So, for now, no Sunny photos!
Posted by debwardart at 12:24 PM 1 comment:

Here are photos of our new arrival – our first “grandcalf”. (I now have a “granddog” and a “grandcalf” – apparently the closest I will ever get to a “grandchild”).

Just a few minutes old and mama is cleaning him up. We were concerned about her mothering skills since this is her first calf – seems she knew just what to do. 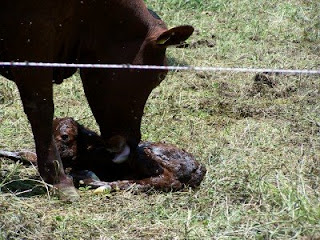 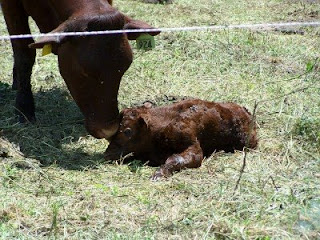 Trying to stand up, front legs first – not working for him! 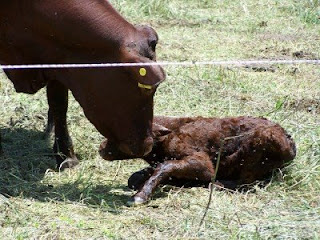 Trying again, back legs first – not quite there yet. 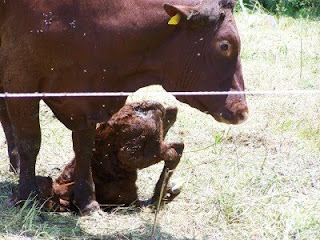 I stood in the field several more minutes to try to get a photo of his first steps - until my husband decided he had better things to do, so I left with him in the gator rather than hike all the way back up the hill – we have A LOT OF HILLS to hike up and down. . . . .
. . . . which is why, several hours later, after he got his legs under him, the calf managed to fall/roll down a hill and wedge himself under the barbed wire fence. My son pushed him up the hill and he went to mama.
Then, yesterday, my husband informed me he couldn’t find the calf – then found him outside the perimeter fence (again, barbed wire, and my husband has the cut to prove it!) and carried him up and pushed him back under. This morning he said he can’t find him at all – one hopes he did not get carried off and eaten last night (we have coyotes, plus large neighbor dogs plus who knows what in them woods!) – I’ll keep you posted.
And, yes, I have now decided this must be a boy – a girl would have figured out the first time not to roll down the hill and under the fence – best to stay by mom for snack time!!!
If it truly is a boy – his name is “Sonny”. If it turns out to be a girl it will be “Sunny” – since mom is “Sunshine”!
p.s. Day 3 – Sonny lives! He was outside the electric fence laying in the tall pasture grasses – we were specifically searching for him and didn’t see him until we were about 10 feet away - the dog was with us and saw him too, but didn’t bother him and came immediately away from him when we called.

All of you real ranchers out there are no doubt laughing at us. All of the books on cattle that my husband has read and seminars he has attended – and he had to call two of the local farmers for pointers on baby calves! He had 9 cows years ago before we lived out here and we have seen the young calves laying in the fields – but neither of us realized that when they are first born the mother hides them. And since the area our cows are in gets eaten and trampled down there is no place for him to hide, thus he has to go outside that area in order to hide.

Guess we will be going day to day with him and hoping for the best until he gets bigger and more mobile.
Posted by debwardart at 11:18 PM 5 comments: 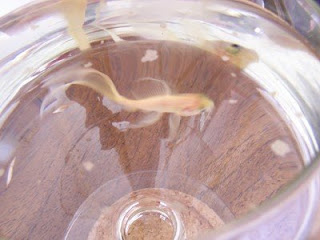 Well, I’m in big trouble with my husband. He’s upset with me that I have not updated my blog for a few days.
I’ve been busy.
There was the GCWS meeting.
There were two classes to teach.
There was homework for classes.
I attended a class over the weekend.
I’m getting ready to teach my first weekend workshop.
I’ve been elected to the Board of the Cincinnati Art Club and they put me in charge of the ViewPoint 2009 show (what were they thinking!) so there were some things to work on for that project.
And I’ve got 5 paintings in the works right now (I know, what was I thinking!) including 2 full sheets??!!!
So – I’ll try to take photos to show you soon on some of these paintings.
Hopefully this quick post will get me out of the “dog house” with my husband!
Meanwhile we are still awaiting the birth of our first “grand calf”. I’ll keep you posted!
In the meantime - Fred and I wish you and yours a happy and safe Fourth of July!
Posted by debwardart at 6:20 PM 4 comments: