Shadows have been darkened, ready to begin on the last vase. 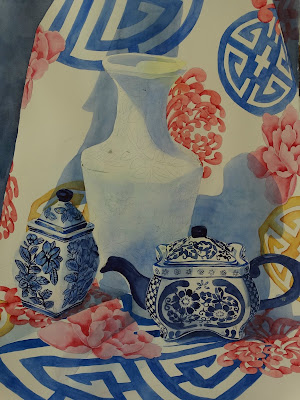 This week I worked on the small pot on the right side. 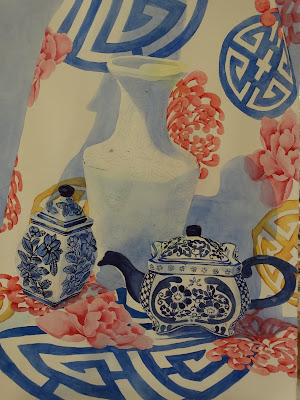 Seems that my pictures are no longer going into my trusty old Kodak software - why I have no idea.  I swear that right after the Big Computer Migration that all worked as I have two uploads to prove it.  Now, however, such is not the case.

Until I'm able to get the photos already in the computer reorganized, locating pictures is a real detective saga.  I have to guess what  year it may have been, then what month, then begin searching that way until I stumble upon the photos I want.  Crap. 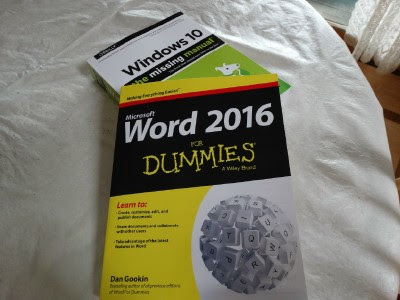 So between working up classes, searching for and organizing photos in the computer, attempting to type info for the GCWS show while using Word in Windows 10 with periodic searches for info in the new book, trying to find time to paint for myself, general living, etc. I'm more than a little frustrated.

There's gotta be a better way.

One of the vases painted.  I will need to darken more shadows. 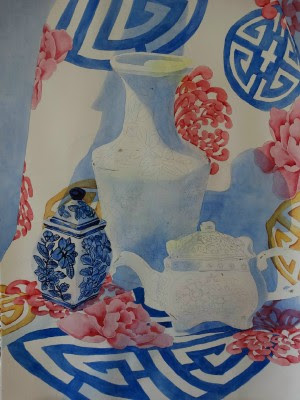 More of the fabric patterns completed. 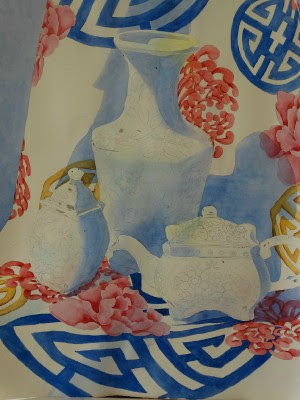 Once again, it's time for a new computer.  My last arrived in 2009!  So I had grown complacent -  until I began receiving dire warnings about no longer receiving updates each time I went onto the internet.  So I called my very own Super Hero "Computer Man" to rescue me - and "migrate" my data!

I gave him carte blanche to buy a computer, monitor and software - and he suggested that I upgrade to the dreaded Windows 10.  (I suspect he's hoping that after this he will never  hear from me again . . . .)

He came and installed the set up in an afternoon.  I was impressed, since it would have taken me somewhere around a year of teeth gnashing, crying and pulling out hair to get this done!

He also suggested I purchase Office 2016 for Dummies (do you think he was actually making a statement about me???) and then I opted to also purchase Windows 10:  The Missing Manual by David Pogue since I thought it might be a good idea to be able to look up what's going on when I have stupid questions and not have to call Computer Man - after all, he might be out on an important computer-based call and not have time for me!  Plus, David Pogue used to be on the Martha Stewart show and has appeared on the Kelly Ripa show and knows all kinds of neat tech-y stuff that I don't understand.  Hey - if he's good enough for Martha and Kelly, he's good enough for me!

So, now I make small forays into the netherworld of Windows 10 while awaiting my shipment from Amazon.  So far I have not lost any documents (at least I don't think I have, but since I don't understand half of what I'm doing it's all a crap shoot!)

Collateral damage of the "great migration" has been the transfer of my photos - which were in alphabetized albums according to subject - which have migrated over in date order.  A pretty useless way for me to access them.  Crap.  (Am I allowed to say "crap" on the internet?).  Which means it will be taking me a while to re-create folders that make sense to me so that I can access my photos.

Which accounts for keeping my older computer "just in case".

I must say, when you look in my office it looks like a real techno-geek lives here - two computer set ups - 24 in. monitor - wow!  Unless you know me, in which case you know that I can't bear to let go of anything that I think might remotely be important to me in the future.  Then you will look at the double set up and knowingly shake your head and mumble something like "oh boy, here we go again".