Check out my painting on the NWS home page!

Things like this don't happen to me very often - I can't tell you how excited I am that Linda Doll chose my painting to be on the postcard for the annual show!

Not sure how long it will be on the website - so click soon!!!
(http://nationalwatercolorsociety.wildapricot.org)
Posted by debwardart at 6:31 PM 5 comments:

I was really worried about Stray. He was lethargic and yelped when he got up. He didn't want to lay down, and when he did, it was only on his side. He didn't eat or drink, didn't do anything - and I thought we were killing him (G U L P) since I had fed him a beef bone the other night, and Mike had given him some deer meat we are trying to clean out of the freezer. I was crying when I left to teach yesterday and Mike had to go out also - but he called me when he got home with 2 "patient" updates!!!

Mike found him on the loveseat when he returned home! Since Stray knows he's not supposed to do that, I knew he wasn't feeling good. I let him sleep inside last night, covered with a blankie, rather than in the garage, and I slept on the couch by him! (Talk about spoiled!)

This morning he wouldn't bend down to eat so Mike put his food on the step and he ate.

At 10 this morning I took him to the vet. Of course, at the vet's office he was FINE. I let go the leash when I checked in, turned around and he was GONE - making a new friend of the person behind me! He was very friendly to everyone - he's a charmer!

He was soooo good at the vet's, I was proud of him! The vet pushed, poked and prodded (same as I did yesterday and with the same results - no yelping) and then she moved his neck, like a chiropractor would - she said she heard a crack! And when she pushed down he yelped. Turns out it's his NECK!

It also turns out that the lumps we occasionally find are just what my Future Favorite Son-in-law said they were - fatty tumors, not to worry, unless they get so large as to "impede his mobility". I got him heartworm meds, and he's on anti-inflammatory and muscle relaxants until he feels better.

Also - much to my chagrin and Mike's delight - I put down "unknown" for breed and they filled in - get ready - - - - Rhodesian Ridgeback!

He ate several treats from the vet - and even took one off the floor - so he could bend his neck for that – and when we got home he felt well enough to devour one Pupperoni stick! Just like a kid!

He does like taking the pills - I get hot dogs, cut them into small pieces, just large enough to hide the pills in - and he eats them like treats, not realizing he just ate a pill!

For now he will be mellowing out on pain killers and muscle relaxants for a couple days - my own personal pure bred Drug Dog.
Posted by debwardart at 9:00 AM 3 comments:

I have a really good friend who will ship my paintings via UPS for me. I do the leg work and get the forms together, but I think she does the really hard part of getting it all organized, put together and sent on its way. Since the packages will then come back to her, she also has to find someplace safe to store them until we see each other – and to protect them from her husband and son who seem to want to destroy them for me! The first time my box was returned, the guys thought it was a piece of useless junk and tossed it outside.

JUNK???? I use the Airfloat boxes which are great – but, let’s face it, once something has gone through the UPS facility and on to a UPS truck (no offense to the UPS drivers who I know do the best job they can) and off that truck and delivered – well, some damage will be done. When I received my brand new box – shipped from the Airfloat company to me – there were oil spots and a “ding” in the side. I know they didn’t ship it from their factory that way – but that was just the normal “wear and tear” – and that was only its first trip! By the 2nd or 3rd trip the boxes look like they have seen battle in Afghanistan (and I’m not sure who won!).
Posted by debwardart at 9:00 AM 1 comment:

As part of the acceptance process for both the OWS and the NWS show, I was asked to answer questions/statements for the show.

Whenever I’m asked for my “artist statement” or to answer artistic questions, I always feel a little like a Miss America contestant – my mind immediately begins to swirl and my inner blonde awakens! What kind of information do they REALLY want – should I try to sound “artsy” – do they want some high brow “art speak” – will my answer sound stupid – what the heck does this MEAN? – who really cares?

You get the drift.

So I wrote up my answers, reading and re-reading them until I finally gave up and sent in the form.

Hope they serve whatever purpose they were intended, and no one thinks (or knows) that I’m a real dope about those things.
Posted by debwardart at 9:00 AM 1 comment:


One of the cows got separated from her calf during a move, then baby and mother “failed to communicate” any more. The calf was wandering around by itself so Mike decided to give it to a 4H group. When they came to get it, the calf was with other cows and they walked away to get hay from Mike, and the calf just watched like “hmmm, wonder where they’re going. . . “ and continued to eat by itself – totally zero herd instinct.

So the 4H family arrived to catch the cow – while I observed from a high vantage point! 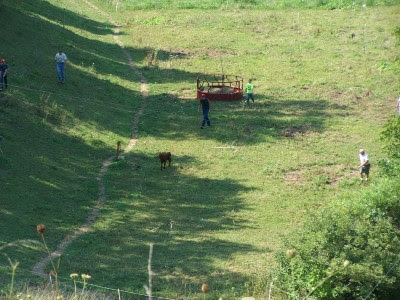 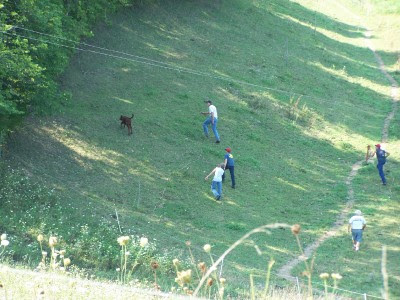 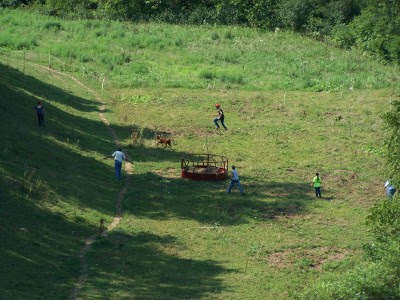 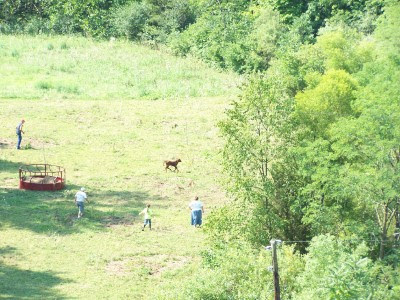 It took a while but finally they got her, loaded her into the little cart that they hitch to the Gator and from there into the cattle trailer. 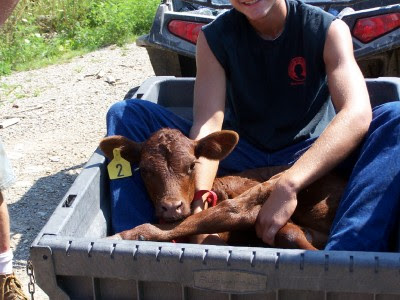 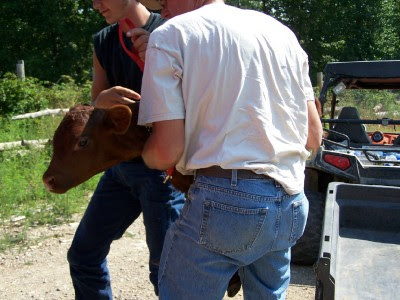 This is why cowboys have lassoes . . .

She’s doing fine now and was at a local fair – Harvest Home Fall Festival in Cheviot, OH – in the petting zoo, so we went to visit her last weekend!
Posted by debwardart at 9:00 AM 5 comments:

In a previous post I mentioned that my painting "Ying Yang Mums" got into the NWS Annual show.  Since then I've learned that it will be a part of the traveling show which will tour the country for a year following the exhibit.  AND - my friend Chris Beck let me know that they used my image on their postcard!

Yesterday I learned that my painting "Flights of Fancy" is accepted into the Georgia Juried Member's show.

Something bizarre must be happening to the Universe - maybe the Mayan legend is true - the world really is coming to an end!

Unfortunately, I didn't have any pieces to send to NWS for signature review (all the "good ones" were out in shows).  But who cares, I'm happy and thrilled to be in that show, as well as the others.  And, in the scheme of things, that's not really a bad "problem" to have.
Posted by debwardart at 9:00 AM 9 comments: