I tried to take a few photos to show the set up and some of the students working, plus their works in progress. 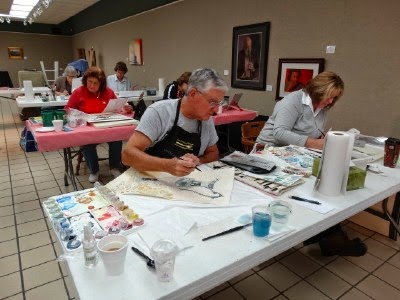 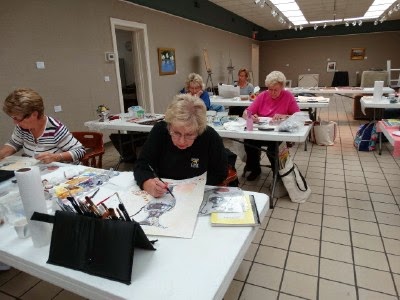 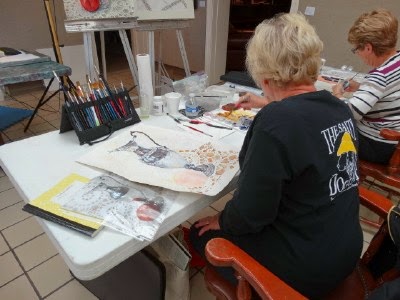 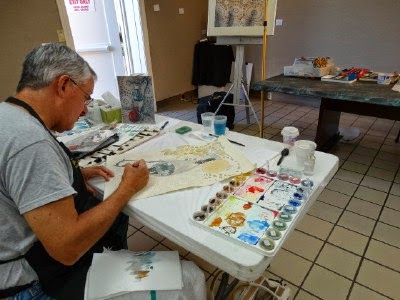 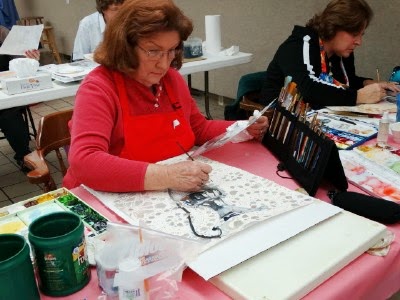 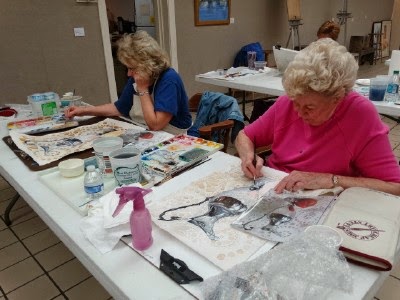 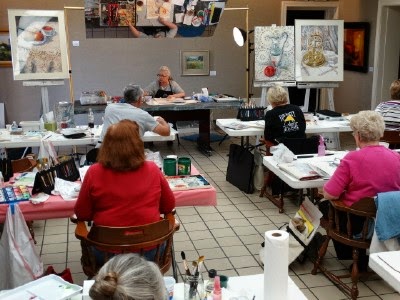 Oh yes, there's also one photo of the instructor hard at teaching!  At least I don't look too awful in this photo, graciously taken by one of my students.

The weekend of October 25-26 I held a watercolor workshop at the Cincinnati Art Club.

On Day 1 we worked on the background and began our silver vase.  Of course, there were some "whines" but also a lot of "wows"!

Here is what my view was for the 2 days - 12 students working hard! 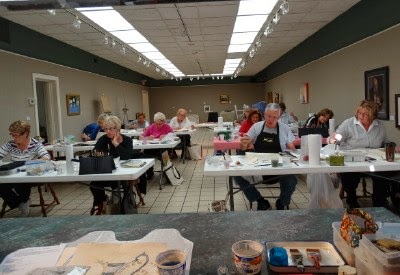 Not only did we paint like crazy, but we also ate pretty well!  I brought rolls and afternoon snacks, and one of the other ladies brought 2 kinds of home made breads/cakes.

Well fortified, we made it through the day - painting right up until the 4 p.m. "deadline".
This is what my demo piece looked like by the end of that day.  (Excuse the mess on the table!) 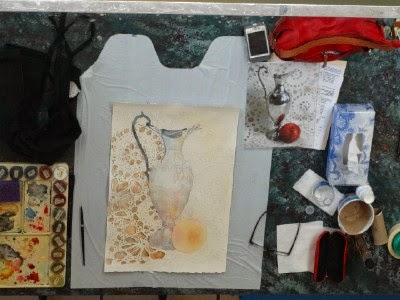 PEACE AND QUIET IN THE COUNTRY???

I was under the impression that when my son built a house and moved into it that he had moved out of our house.

Apparently I was wrong, since this was the view out my kitchen door on Sunday - my son and a friend set up to target shoot. 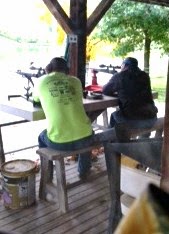 Does this mean that I can now go to his house and get comfy on his deck?????  (Yep, probably not).

When the shooting starts the dog gets nervous, scared and cling-y.  Each time a shot was fired, he flinched.


Welcome to life in the country!
Posted by debwardart at 9:00 AM 3 comments: 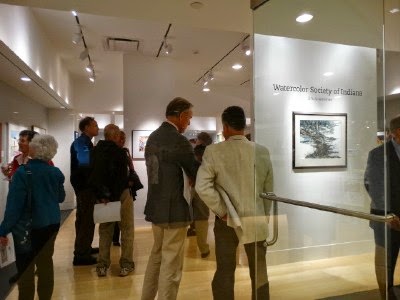 On Sunday we drove to Indy where I received my Signature from Watercolor Society of Indiana.

The show was judged by Kathleen Conover so there were lots of abstracts, and most, if not all, of the paintings had an abstract quality to them.
The show is held at the Indianapolis Museum of Art.  This year we are on the first floor, in a new gallery just opposite the gift shop, so I hope it will draw many more visitors. 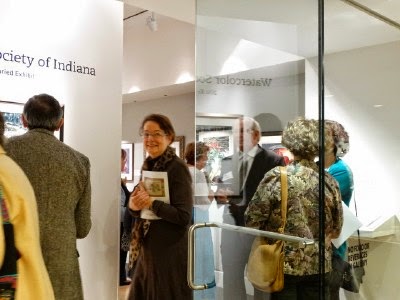 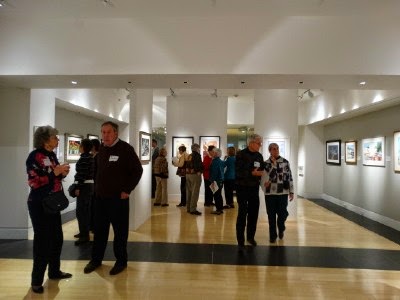 Here are photos of a couple paintings that struck my eye.

THE NEW PHONE (or: The Reason I Have no Time to Paint!)

I kept saying that I was going to get a “smart phone” this fall.  But I did not specify exactly when “fall” was going to arrive.
Not to worry – my friend did it for me.
She bought a new iPhone and GAVE me her old one!  So, no more excuses - it was sink or swim.
The phone sat about a week (much to my daughter’s chagrin) before I finally went to Verizon and had it activated.
I was so worried about texting that that’s all I did.  So, when my phone actually rang and I had to answer it, I had no idea what to do!  (Yes, this IS a true story).
Well, I’ve gotten over that and have graduated to being able to take photos (including "selfies") and get them transferred to my computer (via email, but, hey, whatever works – I’m learning!).
I can even change settings and add people to my contact list.
Sometimes.
Other times I add them and they just disappear.
My daughter and my friend’s daughter have become my “phone gurus”!
Speaking of daughters - my daughter convinced me that I would drop my phone at any moment and it would shatter into smithereens – even though my friend had it for 2 years before and it was in excellent shape.  So . . . .
I purchased an OtterBox to protect it.
I was thrilled when it came, but then could not figure out how to get the phone into the box!  I waited until my daughter could come over and take a look at it.  Turns out she couldn’t figure it out either but went to the internet on her phone (something I have not yet graduated to doing!) and watched a video.
It’s pretty bad when you not only have a phone that is smarter than you are, but a box to store it in that is smarter, too!
Now my phone is totally protected from splashes, crashes, spills and all manner of other ills.
Wish I was!
ps - my husband hates this photo - guess he doesn't get the humor!
Posted by debwardart at 9:00 AM 8 comments:

After more glazing on the flowers and some "finessing" of the paintings, here are our results.

She is pleased with her painting, as well she should be!

Next I'll be helping her complete a painting from her own photo and idea.  Can't wait!
Posted by debwardart at 9:00 AM 9 comments:

Then we began to paint the daisies.  As you know, I like to glaze, so we used several layers to bring up the color on the flowers. 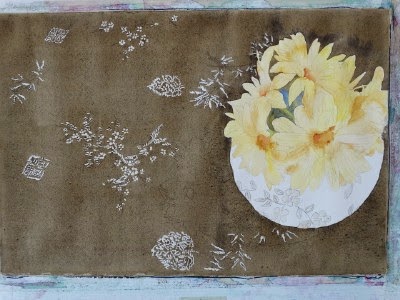 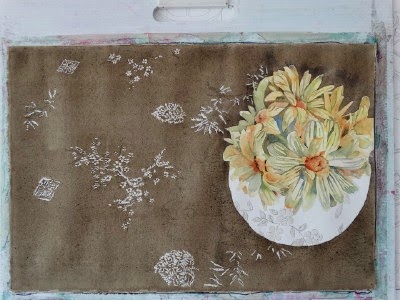 Then we removed the miskit and began adding the colors on the background and on the vase, popping in a few darks in the flowers.  We then added the shadows on the fabric and vase - (I didn't get a photo of the painting after we added the vase shadow, but before completion). 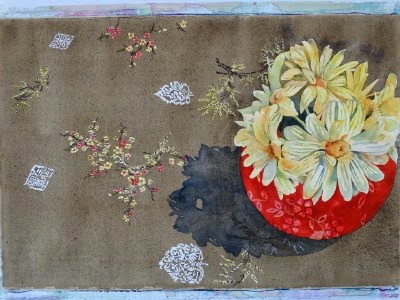