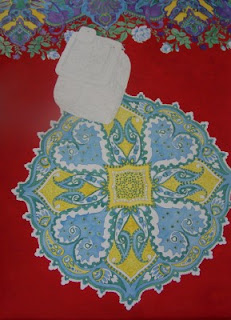 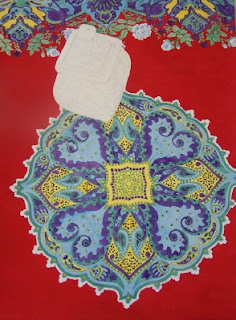 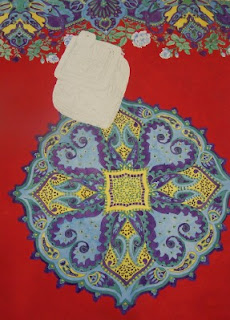 Then I began adding color to the small shapes, beginning with the yellow . . . 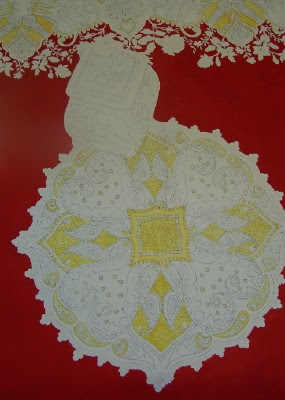 and then the blue.  I also added the detail in the roses. 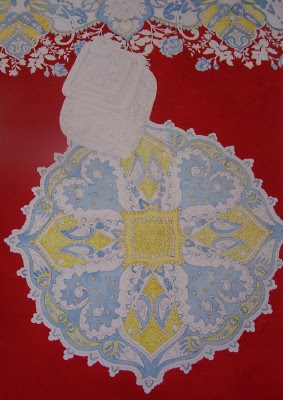 It's been forever (or so it seems) since I've posted a work in progress.

This is another full size sheet in watercolor, which I'm calling "Red Paisley Scarf" since that's what this is based on.

After drawing it out, I misketed the edges of the main shapes and all of the small shapes at the top. 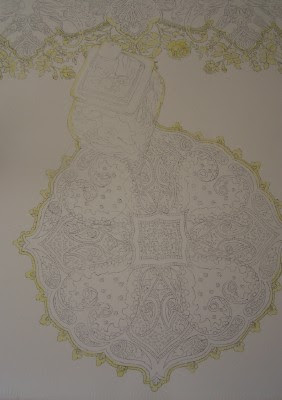 Then red was added.  And, of course, I didn't just add one red, but several different reds in several layers. 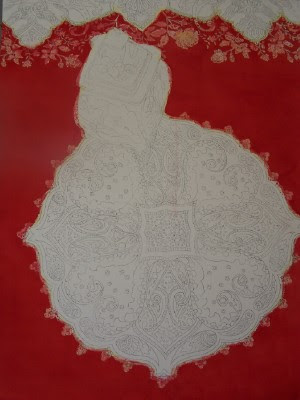 Yesterday I went to Northern Kentucky University (NKU) with my friends, Rhonda and Sharon, to see the exhibit of work by Paul Sawyier - primarily his watercolors.  I had never heard of him, but Rhonda had already gone to see the paintings and thought we might also enjoy the exhibit.

After lunch at Smash Burger, Rhonda drove us onto the NKU campus which, although not large, would have been very confusing to me had she not been the "tour guide".  Even so, finding the exhibit was a bit tricky, since it is split into two areas in the Steely Library building*.

Paul Sawyier was born in Ohio, then moved to Frankfort, KY at age 5.  Sawyier went on to study at the Cincinnati Art Academy, the Art Student's League in New York, then with Frank Duveneck for a year.  He returned to Frankfort and primarily made his living by painting portraits for the wealthy families there.  Following the death of his parents, Sawyier spent 5 years living on a houseboat on the Kentucky River, painting many watercolor landscapes of the area.  He then moved to New York, living first in NYC and then in the Catskill Mountains.  It is estimated that, between 1887 to 1917 Sawyier may have painted over 3,000 paintings, mainly watercolors.  He also painted in oil and pastel.

Here are some of the beautiful watercolor paintings in the exhibit.  They vary in size but the skill shown in all of them, no matter the medium, is amazing.  He used a lot of varied color in the objects he painted, and even though some of the figures in the scenes are small, he was still able to add detail and dimension.  I focused on the watercolors that I enjoyed the most, but all of the paintings are beautiful.


﻿
If you live in the Greater Cincinnati area, you should definitely try to get over to NKU and view this show. It will hang until December 7.

If you are in the Greater Cinicnnati area, hope you can visit the Rising Sun Art Show in beautiful Rising Sun, Indiana on the banks of the Ohio.

It makes for a beautiful fall drive along the river.

The opening was Friday night.
Posted by debwardart at 6:39 PM No comments: