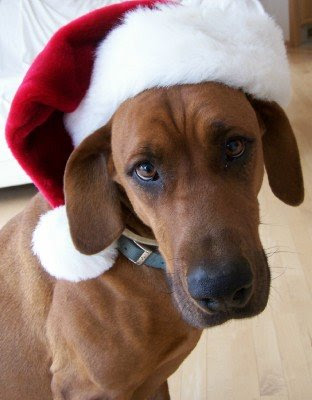 Spent today running errands and going to the eye doctor (where I’m told that no, my eyes aren’t going bad – I just need to WEAR MY GLASSES!). Tomorrow will be spent with my daughter doing some shopping and visiting my mother-in-law who is 97 and getting to be quite frail (I’m worried about her). Then it’s Christmas (at my daughter’s) and then New Year’s (I’ll be cooking turkey, etc.) – so this will be my final blog of 2008.

I’m planning on doing some painting, getting myself more organized and doing some research in the rest of these final days of 2008.

HAPPY HOLIDAYS!
SEE YOU IN THE NEW YEAR!

When I decided to teach “kids” – middle school through high school age – I wasn’t sure what I was getting into. Well, turns out the kids were a lot of fun to be around. They take learning seriously, asking intelligent questions and trying very hard to “get it right”.

I was invited to come to their fall program on the final evening of classes, so that was “date night” for my husband and me. There were two choirs – elementary and jr/sr high. I expected the older kids to do well and they did (most of my art students were also in the choir) but we couldn’t believe the fantastic job the younger kids did – not only learning the songs but putting choreography with them!

After the program it was off to see what all of the classes had been up to. Each class had a display area and the watercolors looked pretty good, having been “matted” on construction paper and hung on a display board. Then over to the food line for some home made desserts. It made for a different but really fun evening.

Here are some of the students hard at work (or hardly working!) 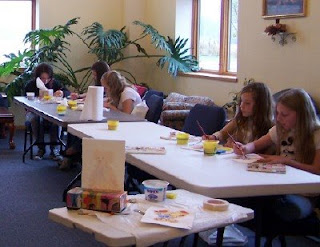 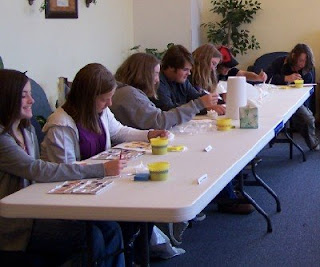 Posted by debwardart at 1:10 AM No comments:

This is my first street scene – and I don’t think John Salminen has anything to worry about yet!!!

There was a bistro on the sidewalk and so many people walking along the street, but the brilliant orange of this woman’s sari caught my eye. I left out all the extraneous details and focused on her and her companion. My goal was to keep the eye focused on her and/or the flags, while the buildings faded into the background – just the way they did that day – it was slightly overcast and things in the distance were hazy.

Orange is not my favorite color, but when I began this painting I discovered that I have 3 tubes of various vermillion colors, as well as a couple more oranges I didn’t realize I had! (It’s amazing how much paint you accumulate over the years). The orange of the sari is a combination of various layers and blends of quinacridone gold, cadmium yellow, cadmium orange and the 3 vermillions.

Also, I have never done a thin, tall painting before, so it was interesting.

I think it’s done, but your comments, suggestions, critiques are welcome.

“Showing Their Stripes”, watercolor on Fabriano Artistico
Posted by debwardart at 11:26 PM 4 comments:

WAITING 'TIL THE COWS COME HOME! 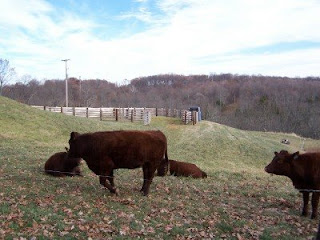 Well, they finally did!

(Normally my posts are art related, but not this one).

Last week my husband and son drove to Massachusetts and New York to pick up four Devon cattle heifers. He’s been preparing for their arrival for months, installing water taps, perimeter and electric fencing, planting pasture and building a corral. He’s embarking on his second career – Cattle Rancher!! 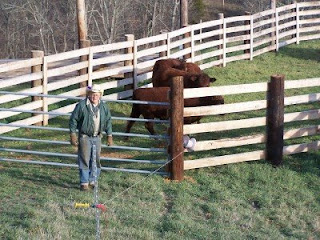 I couldn’t resist purchasing the appropriate cattleman’s hat and embellishing it with a purple feather puff – purple for the Cincinnati Elder Panthers (for you Cincinnatians who might be reading this) - he does truly bleed purple!!! That was his surprise when he got home from the trip. Another surprise was dangling from his key chain – a cute little cow with a button on its head that, when pushed, lights up its nose and makes it go “moooooooooooooooo”. (Took him a while to figure out that it was on his key chain, too!!!). (There will be another surprise for him some time in the future – Mike, if you read this be afraid, be very afraid!) 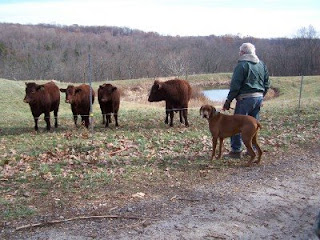 The “girls” should be with us for some time as our brood cows. I was going to name them, and turns out that at least two of them already have names – Sunshine and Erin!! Either the other two have no name, or I just haven’t gotten close enough to them to read their “earrings”. They are pretty docile so far (but I’m not planning on getting close enough to test this theory since, even though not full grown, they are mighty big). And, so far, I have not had a shocking experience with the electric fence, but I’m sure it will happen one of these days (lucky me). 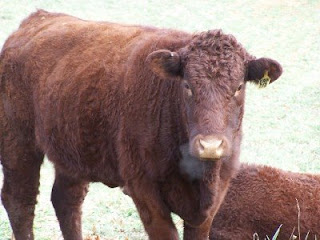 Some day, in the far distant future, after calves are born and raised, we will be involved in Grassfed Beef Farming (we hope). But for now we are all (including the dog) just getting to know one another. 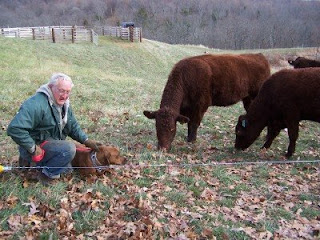 From time to time I’m sure that some odd or bizarre event will occur with these bovines (or husband) especially if they prove to be as brilliant as chickens. (In re-reading that sentence it appears that I’m referring to both the cows and husband as not Mensa members – you be the judge!).