I've been chastised by a friend - "why haven't you put anything on your blog lately?".

Well, sometimes this painting process is S L O W!!!
So - I’ve decided to put up some “Driving Around” posts to supplement my painting posts!
In between my paintings, enjoy some photos of this beautiful area where I live – southeastern !

Here’s one of my favorite sites – I pass it almost every day. 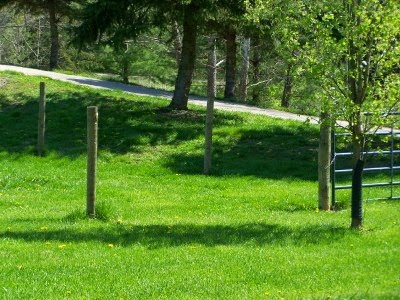 You have all heard of “invisible fence” – here is an original version!
This fence has been in this condition for several years!  (Note the lock on the gate!!!)
Posted by debwardart at 9:00 AM 2 comments:

This one is a different brand and it’s amazing how things can be so different to do simple functions.

My printer was 2 years old, and I have to say I print a heck of a lot and had not had problems with it until about a month ago when I had a paper jam and had to take it apart, repair it (with the help of the internet DIY) and put it back together.  It was then working fine.

I tried printing a Word document from my computer and – it printed!

Tried to copy again - white paper.  I did every diagnostic test on the printer – no black was printing.

I got online to find out what to do and followed everything to the letter.  Then the printer gave me an error stating “Printer Failure”.  Duh!

After more coaxing of the machine it would again print from the computer - no copies though.  But at least that was a stop-gap measure until I could get to Staples to buy a new printer.

At least that WAS a stop-gap measure.

The next day it happily printed something from the internet - - - and then threw up its hands and refused to print another darn thing, glaring at me with that “Printer Failure” every time I tried to print something.

Once I found out that a new printhead (if that’s what it was) would cost half of the original price, I thought I would simply purchase another printer just like mine since I had tons of ink cartridges for it.

When I found my printer listed on Amazon it came with a disclaimer – they won’t sell them except through a 3rd party since there have been “issues” with this printer.

So I’ve been researching printers – and getting very frustrated.  I know what I want on a printer, but probably can’t find all of those things on the same printer.  Don’t you just love technology!

Researching anything on the internet is time consuming and can be frustrating, so I will just go to Staples, buy a printer for a hundred bucks and figure I’ll be replacing it, and all of its ink, in about two years.

(I just hope they will give me credit on the ink for this printer.  I think they will since it’s all been purchased via Staples and they should be able to verify that and give me a refund.)

My husband asked me to print a couple of contracts for him.  I reminded him that my printer was broken, then emailed the contracts to him so he could print them on his printer.  He later came into my office and asked me if I’d remembered to print off the two envelopes . . . . .  Seems I may have bigger problems than a broken printer!!!!
Posted by debwardart at 9:00 AM No comments: