SLOGGING THROUGH THE OLD STUFF . . .

It’s been a while since I’ve really had time to paint, and in order to sort of “get back into the swing of things” I’m working on something that’s quite old.

This one was started for a demo some time ago, then left to sit. 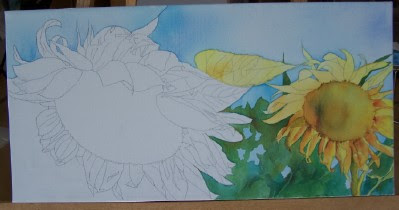 As noted, this was a demo – so I had part of the sky, some of the yellow on the right flower, some of the greenery completed before the demo, then added some to the painting during the demo. You can probably see where the sky was stopped and started at the top of the left sunflower – I let a petal run off the page at that point.
Posted by debwardart at 8:50 AM

Looking good, Deb. Nothing wrong with going back to finish things if the mood strikes you again and this is going to be beautiful.