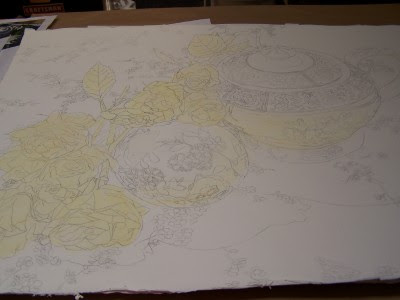 I put all of my brand new brushes into clean water to dissolve the sizing on them and began painting in some cobalt with another old soft 2 in. flat – I think that it might be a Stephen Quiller, but the paint has chipped off.

In the meantime I made a swatch of colors I planned on using to decide on my pinks and blues. Several of the tubes refused to open! One was completely hard – a Daniel Smith color - which surprises me. Anyway, after holding a couple of the tubes under hot running water, I was able to unscrew the caps and try out the colors.

Finally it was time to begin painting with the new brushes!

And – the War began.

I always tell people not to fight everything, just one thing at a time. But, it would appear that in this painting I’m going to be fighting the paper (tooooooo soft), the brushes and the paint! 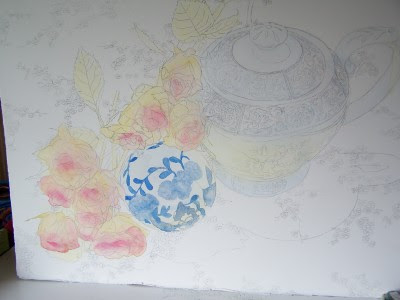 It would appear that these WN tiny pointed brushes morph into gigantic brushes when water is added. They made me think of those sponges you can buy that are shrunk up all tiny and hard but when you put them into water they expand and expand until you think they will fill the kitchen sink! The #8 round got at least 3X it’s original size! And, since all of the brushes are new they have a different feel so I’ve got to get used to that, too.

And I’m using different colors of paint that I’m not used to.

So I’m putting down the water which immediately wants to sink into the soft paper (did I mention that the paper is really, really soft?) with a very soft brush that I’m not used to which is holding and depositing more water than I’m used to and, even using the color swatch, paint that is morphing into a different color as it hits the paper - this one is really going to be a challenge.

I hope you win the war:) You are convincing met o stick with the paper I know and love. Love watching the process. Can't wait to see it evolve.

Oh my Deb, you have quite the task set before you. Daunting as it may seem, I have every confidence in your ability to pull this one off and not pull your hair out. :)

Carrie, I had this paper and have used Fabriano a lot, but guess this is the old Uno. Will be trying new paper only on small paintings from now on and pretty much sticking with what I know!
Carol, You give me too much credit. And I don't have to pull out my hair - it just falls out on its own!!
Martine (translation) am very anxious to see the result of your work ... Your basic design I like both and I am convinced that the final result will be a magnificent. Well, Martine, we shall see about that! Don't hold your breath. (Ne retenez pas votre souffle)